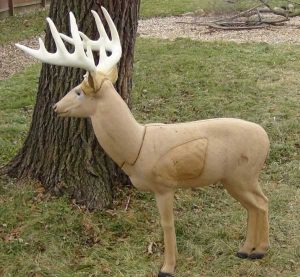 Design and look of the Rinehart Booner Buck

I received the Rinehart Booner Buck immediately after returning home from my South Dakota pronghorn hunt. I decided I would put the target up just outside my garage and shoot it a bit. The next morning I took a couple more shots and then went about my business. My wife, not knowing the target was in our backyard, was shocked to see a real deer just standing there! I guess the target passes the test for having a lifelike design.

The overall makeup of any Rinehart product is one of high quality. Their designs are cosmetically excellent and the science of their materials is and has been superior in comparison to the competition. From the self healing foam to the look of the Rinehart Booner Buck, this product continues Rinehart’s deliverance of excellence in manufacturing.

Performance of the Rinehart Booner Buck 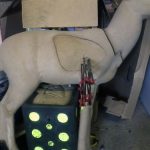 After shooting the first couple dozens of arrows, I noticed the arrows were a bit of a pain to remove. Then I remembered that is how my two year old Rhino block was when it was new. After about four days of shooting, I decided I was going to let this target have it. My goal was to shoot it out in 2 days. I figured if I could get over 500 arrows into it and if I shot tight enough groups, I could shoot a hole through it.  Well after over 300 arrows (and two robin hoods), I didn’t even make a dent in the target.

I was growing bored of the same perfect broadside shot so I changed the angle of the target. I shot an additional 200-300 arrows at the target in the quartering to, quartering away, and straight on angles. I switched bows once or twice to change up the kinetic delivery. By the time I got to 500 shots, I can honestly say I have shot this deer in every spot that you possibly can.  I have shot him from head to butt, with a broadheads and with field points. My only warning is to not shoot him in the legs due to the presence of metal conduits that receive the rebar stakes. Hitting these conduits will ruin your arrows, but due to their location, they shouldn’t come into play unless the shot is off.

My thoughts of the Rinehart Booner Buck 3D Target

After around 500 to 700 shots in 2 days, I can tell you a few things. First, I will not be trying to destroy a target in a short time period of time by myself again anytime soon. Second, this target took it like a champ. My hunting setup, a PSE DNA Dream Season (shooting a 435 grain arrow around 320 fps) barely pokes out the back of the target. My target setup, a PSE Supra (shooting a 385 grain arrow around 285 fps) only achieved a few inches of penetration. This target proved why Rinehart is the “go to” target for most major 3D tournaments and courses.

The only design flaw I discovered was that the rack does not really have any means of fastening to the head. It just kind of rests in the head and is subject to falling off the deer. This isn’t a big concern to me as I am not interested in the rack when I am shooting at my target. However, I would suggest using a couple of 3 inch drywall screws to secure the rack to the head if this problem becomes too bothersome. 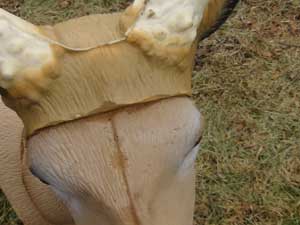 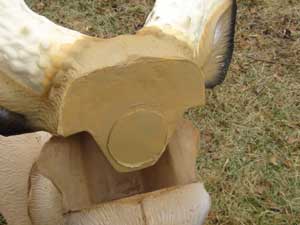 I will continue to shoot this target for the remainder of the year and if, for some unforeseen reason, the target begins to fall apart, I will make updates to this review, but I don’t see that happening. For now however, it’s off to ice my shoulder as that marathon shooting session got the better of me not the Booner Buck! I give the Rinehart Booner Buck 3D target a score of 8.5 out of 10 stars.


Pros and Cons of the Rinehart Booner Buck 3D Target