With arrow builds, FOC, or front of center, is an important factor that affects arrow flight and penetration. In this article we are going to take a closer look at arrow FOC and how to use it for our advantage.

FOC refers to “front of center”. This is how far the balance point of an arrow is forward of the measured centerpoint.

How do we find the FOC of an arrow?

When finding an arrow’s FOC%, we are going to use a formula. In this formula the measurements we will need are as follows:

Use these values along with the formula below. Click on the image for a closer look. 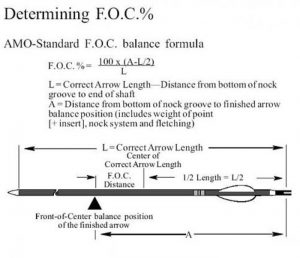 The Different Classes of Arrow FOC

Now that we understand what FOC actually is, let’s dive deeper into the physics behind FOC and performance.

When building arrows we need to look at what is called lever arms. There is a forward lever arm and a rear lever arm, at the balance point. Controlling the length of the lever arm controls amount of flex during the shot and during impact. This is how we end up with a good penetrating arrow with the best dynamic reaction.

When setting up your arrow we look at tip weight. The average person shoots a 100 or 125-grain tip, with an average 12% FOC. When we look at this arrow what we see in an average of a 28-inch length arrow (carbon to carbon) with a standard insert, we get a total length of 28.34-inches for FOC calculations (end of shaft to end of nock groove). So depending on what nock/vane weight and tip weight you use, your balance point will be around 17.625-inches with center of shaft being 14.17-inches measured from the nock groove. The balance point is 3.46 inches in front of the middle of the total arrow length. 3.4 inches divided by the total arrow length (28.34-inches) gives us 12% FOC.

As you continue to increase tip weight, the balance point moves closer to the tip. This increase in arrow FOC shortens the forward lever arm even more, and increases the length of the rear lever arm.

Impact flex is something very few people look at or even think about. Impact flex plays a big roe in penetration. Let’s look at impact flex compared to FOC on a 12% arrow.

Looking at an arrow with a 19% FOC we now have a shorter forward lever arm. The higher FOC, which results in a shorter forward lever arm, will have more momentum than the lower FOC arrow. The higher momentum arrow should have slightly greater penetration, and the rear lever arm will have a less oscillation and a faster recovery. This rear lever arm to have the proper recovery rate also has to be correct dynamic reaction (select appropriate static spine rating for the higher point weight). Just adding tip weight to increase FOC will or can cause penetration problems. This is why when building high/efoc arrows, dynamic reaction arrow tuning plays a big part in building a good hunting arrow.

We’ve looked at flex on impact and why higher arrow FOC works. Now let’s look at flex on shot and what we do to make sure we don’t have too much flex (weak arrow reaction) and poor flight. Let’s look at the lever arms again.

To control this amount of rear lever movement, we control the amount of FOC we adjust the static spine by selecting an appropriate arrow shaft. Since we are looking at building a hunting arrow and getting the best penetration, then we lean towards an arrow with higher FOC. So in order to contend with the rear lever arm length, we can control dynamic spine reaction with appropriate static arrow spine selection.

To look at controlling the rear lever arm and to get the best reaction we need to look at tuning methods. We look at dynamic reaction tuning. Doing this type of tuning gets us to the correct static arrow spine rating and the correct rear lever arm length before starting standard forms of tuning. 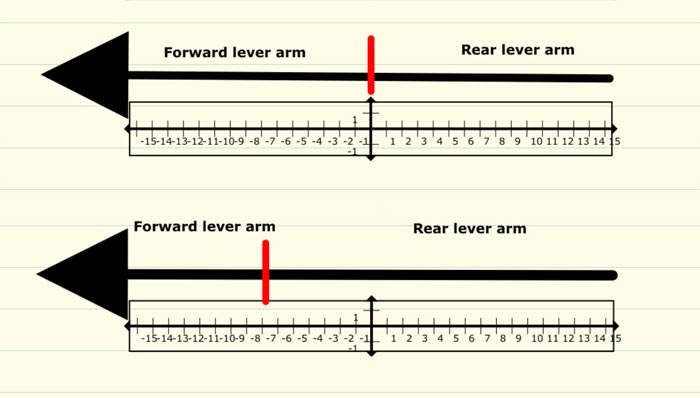 So, let’s say the penetration resistance at impact (penetration into tissue or bone) is 20 lbs of resistance. We have two arrows, Arrow A (400 spine and 425 grains total weight) and Arrow B (400 spine and 550 grains total weight). Arrow A and Arrow B do not start to bend, until 25 lbs of impact resistance. Impact flex for both arrows will be at a minimum, because resistance to impact from the arrow will be above the resistance required to cause the arrow to bend/flex at impact. Arrow B will outperform, due to increased momentum from the higher total arrow weight. 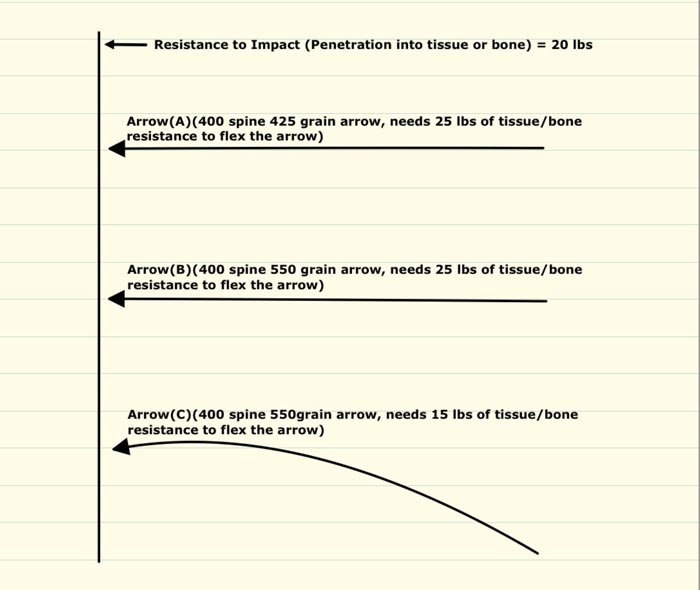