I have been going back through the Dr. Ashby studies and looking at his testing and results. Doing this has brought up thoughts. I thought I would address some of Dr. Ashby’s data from my opinion and how I interpret the data. I’m only going to write about the high lights as I see them. I recommend that you look up the studies and read for yourself. Here is a link to the studies https://www.ashbybowhunting.org/ashby-reports.

In this study, he shows that “measured penetration on shots striking similar tissue was suggestive that there is a definite lower limit to arrow mass, regardless of shaft material, for adequate penetration, even with the best of the broadheads were used. Consistently reliable adequate penetration appeared to require a total mass of at least 650 grains if any bones were encountered on the animal of moderate size. There also appears to be a marked increase in penetration occurring when the total mass was in the 900gr range.”

“based on test results, no responsible bowhunter using a multiple blade head should take a shot at even a modest-sized animal that is facing him or angling toward him.”

I’m sure this statement is based on the testing showing that single bevel broadheads had a 22.1% total penetration vs. 10.4% on multiple blade broadheads. In this section, Dr. Ashby has lots of information on penetration. I recommend you taking the time and read.

People need to understand that an arrow’s kinetic energy is always there if the arrow is moving.

From a physics aspect

In this part of the study, he looks at different

Next, he compared an arrow at 138% more kinetic energy. He did this by shooting a different bow and a lighter arrow. This arrow also had 10.3% more momentum. The arrow had 12.8% less penetration. Now, he does state that looking at the momentum, the lighter arrow should out penetrate, but it doesn’t. The reason is mass. By looking at this test, we know that momentum is not a predictor of two different bows and set up. Mass is the predicter.

Here he talks about broadheads and tip designs. Edge sharpness and broadhead setups he is testing. One thing he stated is “the kinetic energy and momentum measurements referred to throughout the updates are the levels at impact, not those as the arrow leaves the bow.”

That is an important part to remember as most people take this measurement at the bow and not the target.

Now this one I broke down. I saw some interesting variables. In his testing, the variables were not shooting the same broadhead or the setups the same amount. In his chart, you will also see KE variations. I would conclude this comes from shooting his longbow and not having repeatable releases. For me, this doesn’t matter as it is within a percent of err in testing.

The charts their self’s are not from Dr. Ashby. The charts or done by PNL TESTERS based on the test data provided by Dr. Ashby.

It is odd that we teach people that as you go up in mass, so will penetration. But if you notice, this didn’t happen except for the least amount with the 620gr and the most with the 985gr arrow. Here you can see he tested eleven arrows with mass from 620gr to 985gr. All arrows have an EFOC set up. The gain/lost% part of the chart is compared to the 620gr arrow. You will notice gains and losses in mass, EFOC, avg. penetration, KE, and momentum. It also shows the number of times each arrow was shot.

Here is a chart looking at the mass vs. penetration 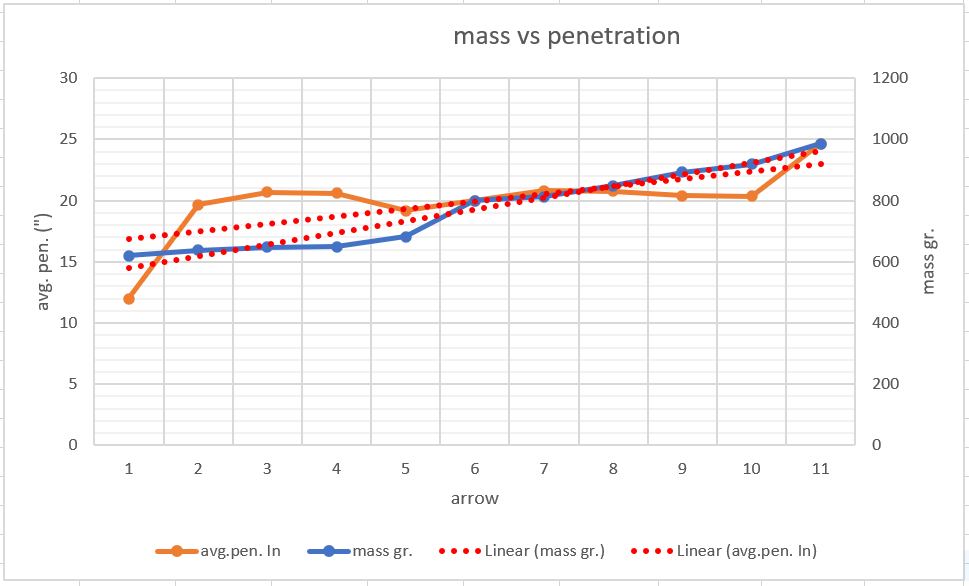 In this chart, it shows a trend of as mass is increased penetration increased. But let’s remove the lightest and the heaviest arrow. 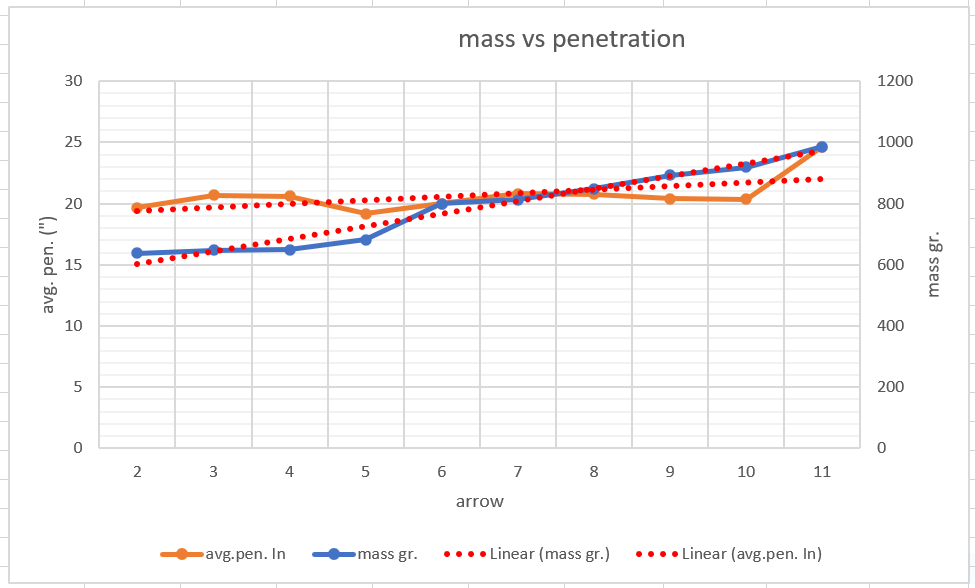 Now, if you look at it, you can see that from arrow 2 (637gr) through arrow 10 (919gr), there was only a 5.84% increase in penetration. Let’s remove the mass from the chart to take an even better look at the penetration gain. 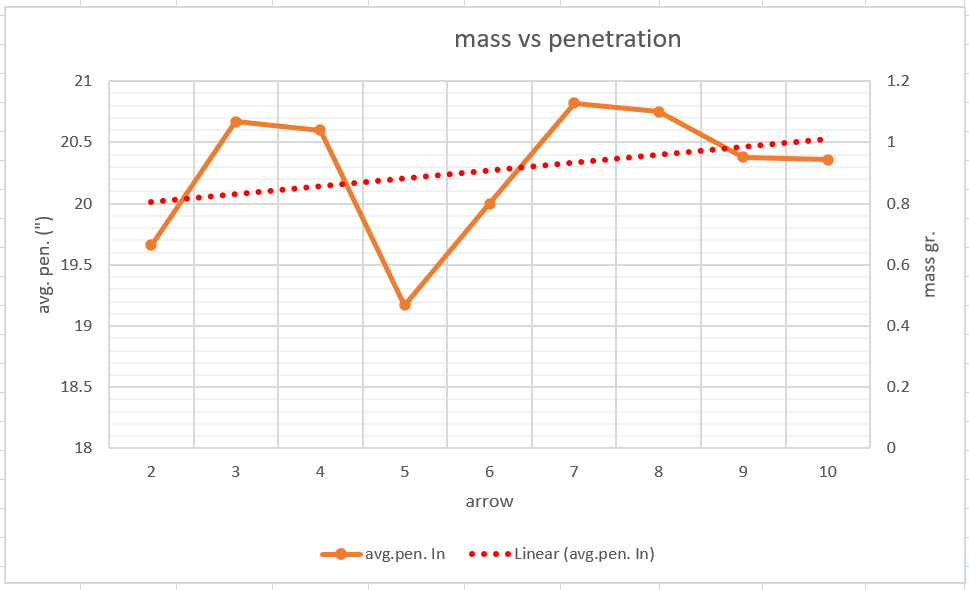 Now we must look at why as this goes against physics and what we are taught. Looking at this chart, there would be zero reasons to shoot any arrow above 637gr. In soft tissue. Why lose the trajectory for less than 5% penetration gain.

Let’s look at the chart from Dr. Ashby.

Is momentum being a predictor for penetration? Arrow 9 (892gr) had a .57momentum. But yet only 50% of the 6 arrows tested penetrated the off rib. Out of those, only two were a pass-through. If we compare it to arrow 2 (637gr.) with .45 momentum. The heavier arrow has 26.67% more momentum but almost performed as well as the arrow with 40% more mass. I feel it’s in the broadhead. It does go to show that increasing mass is not always the best way to improve penetration. Looking at the broadheads used, you can see he was changing which broadhead. Here you can see why there was a variance in the test. In my opinion, this skews the test.

Part 2 of my Ashby Analysis will be a continuous look at the studies and my opinion.