One skill that is paramount in bow hunting is knowing when and how to blood trail a wounded deer. Often times, hunters lose out on a trophy of a lifetime because they have rushed blood trailing deer or just didn’t have a good strategy. With our years of experience, we believe we have developed a great system that will increase your chances of recovering your deer. 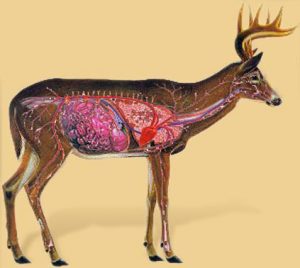 The first two important things to determine is what part of the body the deer was shot in and how it ran off. Not knowing this information can result in premature searches and the pushing of wounded deer. Some shot locations result in a quick 5-10 second death while others require an 8 to 10 hour wait for the animal to expire. Let’s go through the different shot locations.

A heart shot will result in a quick death to the deer. After being shot in the heart, the deer will sometimes jump up and do a “mule kick” and then proceed to dart off at a blazing speed with its tail down. The blood from a heart shot deer should be a bright red and thick. The blood should spray out a nice pattern which is normally easy to follow. Heart shot deer make blood trailing deer easy in most cases.

Heart shot deer will rarely take the time to find a trail to use and will just choose a direction and go.  If you listen closely after a heart shot, you will sometimes hear the deer crash through thick brush and even expire with a frenzy of kicks/twitches after hitting the ground.

If you suspect you shot a deer in the heart and did not see the animal go down, give the animal at least 30 minutes before blood trailing. Heart shot deer will typically run anywhere from 15 to 100 yards before dying.

The best place to aim at on a deer is the lungs just above the heart. If you are off your mark a little, chances are, you will still be in the vital area with your shot placement. Lung shot deer normally wont go very far and leave a frothy bright red blood trail. Sometimes, there will even be bubbles in the blood.

Lung shot deer will run off like a bat out of hell with their tail down just like a heart shot deer. They also will not take the time to follow an established deer path and will often dart through some thick vegetation.

After shooting a deer in the lungs we suggest waiting 30 minutes to 1 hour before looking for blood. A deer shot through both lungs will normally run 20 to 100 yards before dying. A deer that only has a partially clipped lung can live much longer and travel further, so treat a questionable lung shot as if it were a liver shot.

A liver shot is normally the result of a shot that was off its mark and rear of the vitals.  Often times our aim is off, we took a shot at a walking deer, or we were fooled by the deer’s front foot placement. When a broadside deer’s front leg is back in its stance, the front portion of the vitals is covered. This leaves a small portion of lungs exposed and a shot that looked good at the time of impact actually may have hit rear of the lungs and hit the liver. When possible, wait for a deer to step forward with their front foot, exposing the vitals, before taking your shot.

The liver shot is a fatal shot but requires a much longer wait time than a lung or heart shot. Blood trailing deer after a liver shot is probably the trickiest of all hits. Many deer are pushed due to a premature recovery attempts with a liver shot deer.

A liver shot deer may take off at any pace, with its tail up or down, but will usually bed down after a short distance. If not disturbed, the deer will normally die at this location. The blood from a liver shot is more of a darker red/maroon and has a watery consistency. We suggest waiting 5-6 hours, if the weather permits, before blood trailing a liver shot deer.

Ah the dreaded gut shot….. When we are well off our mark and shoot a deer in the stomach/intestines area, we will hear a hollow thud. The deer may run or walk off in any fashion and will usually have their tail up.

With gut shot deer we suggest waiting 8 to 10 hours before pursuing the blood trail.

Here is a list of things to do after shooting a deer.

What to have in your blood trailing deer kit 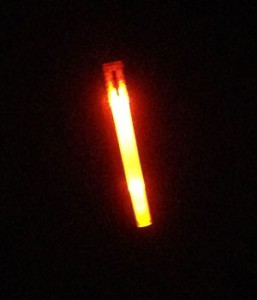 Inexpensive led glow sticks can be seen from far away and serve as excellent markers at night.

It is a necessity to have a good blood trailing deer kit. Fanny packs or back packs will allow hands free searching and have plenty of room for necessary equipment. The following is what we suggest you keep in your kit:

If you are prepared and fight the urge to prematurely find your deer, we think our system will help you in your recovery efforts. Below are some more blood trailing deer tips. Good luck!