If you are a deer, elk, or moose hunter, your hunting future may depend on the control of the seemingly unstoppable Chronic Wasting Disease.

What is Chronic Wasting Disease and why should I care?

Chronic Wasting Disease or CWD is a spongiform encephalitis, caused by an abnormally folded protein called a CWD prion, that is infecting deer, elk, and moose across America. The CWD prion protein is found in the membrane of cell walls. It has receptors that attract normally folded prion proteins and causes them to refold into the CWD form. After the transformation into a new CWD prion, the CWD prion can now split off and attract other normal prions, thus replicating and spreading. Once too many proteins are abnormal the cell dies. In brain tissue the dying cells result in lesions. As the number of lesions increase the animals displays more aberrant behavior; loss of appetite, disorientation, lack of fear response, weight loss, and finally death. Unfortunately once infected there is no hope, no known cure, and the disease is always fatal.

Chronic Wasting Disease was first diagnosed among captive deer herds in the 1960s. It made its way into the wild herds by the early 1980s. It is thought that infected captive animals escaped, introducing the disease to the wild deer and elk. Exactly how the disease passes animal to animal is not known. It is thought that the diseased prions are found in the mucus, saliva, and waste of infected animal. As the animal sneezes, drools, and leaves waste, it also leaves the CWD prions. The Chronic Wasting Disease prions are also released from the decomposition of the bodies of infected animals. Since the prion is a protein and not bacteria or virus it does not die off over time. It remains infectious indefinitely. The next animal to come along and feed ingests the prion and becomes infected. In the short time since introduction, the disease has spread over fifteen states and two Canadian provinces¹, with no end in sight. 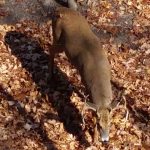 Due to the long incubation periods of prion diseases, not enough data has been collected to answer that question definitively. Many specialists believe that the genetic species barrier that protects humans from other cervid diseases also protects us from Chronic Wasting Disease. There are other prion diseases that effect people: Fatal Familial Insomnia, Grestmann-Straussler-Scheinker Syndrome, Kuru, Creutzfeldt-Jakob Disease, and Variant Creutzfeldt-Jakob Disease. The last of these diseases is the only one linked to a disease in animals. Variant Creutzfeldt-Jakob Disease appears in higher frequency in areas that have high instances of “Mad Cow” disease. Mad Cow disease is a prion disease in cattle. Eating of infected meat is one possible cause of this increased occurrence of VCJD, but this has not been proven. Scraper, another prion disease found in sheep, has been known since the mid 1700s and shows no link to any disease in humans. Studies are ongoing in areas with Chronic Wasting Disease outbreaks to see if any human prion diseases start to increase in frequency, but it will take many years to compile enough data to make any accusations one way or another.

So what do we do to protect ourselves from Chronic Wasting Disease?

Testing is available in most states with Chronic Wasting Disease outbreaks. The CDC recommends always wearing gloves while field dressing and avoid contact with brain and spinal tissue while field dressing. This means avoid cutting the backbone or skull of your deer. If you have to cut the skull or bone of any sort, be aware that contamination of edible meat may be a possibility if the deer is diseased. It is also recommended to debone meat without cross contamination. One theory on the spread of prion disease among captive animals was bone meal added to feed as a calcium supplement. It is also always a good idea to never eat animals that appear sickly. So with some common sense and an inexpensive test, you can still put safe, healthy, and delicious venison on your table.

Tom is an avid bowhunter and product tester at shootingtime.com. He resides in Ottawa, IL and is married and has one son and one daughter.