These sounds include the following:

These sounds can be heard from a great distance. When bucks within range hear these sounds, it may trigger them into action and if it does, look out!

Deer rattling success is comparable to hunting coyotes with an electronic caller in my opinion. You have to access your hunting area undetected; so that means that your targeted buck(s) can not be within immediate (hearing and scenting) range. The bucks do, however, have to be in hearing range of your rattling.

As previously stated, if you arrived at your hunting location in a quiet manner, you can start rattling. After a couple of minutes of rattling, stop and be on the look out. A buck within hearing range of rattling will not take long to find you. If you don’t see a buck within 10 minutes, its safe to say that either there were no deer in audio range or the bucks are just not responding aggressively to rattling yet. They still may get curious and take their time reaching and researching your location, so its best to always be ready.

After the first unsuccessful attempt at deer rattling, its important to allow enough time for deer to enter the audio range. Audio range for an aggressive rattle can be up to 1/2 of a mile. We suggest waiting at least an hour or more to start the next rattling sequence.

Hunting pressure in your area

Too much hunting pressure will drive down success rates wherever you hunt. Hunters educate deer. While young deer may get fooled often due to their curious nature, older deer are wiser. Older deer (trophy bucks) have witnessed many rattling attempts by hunters and proceed with extreme caution. The success of deer rattling on private land vs public land is drastic.

If you want to rattle where the hunting pressure is high, make sure you are perfect in your execution and try some outside of the box techniques. One technique is to rattle in the early morning when its still dark. Still dark you say? Yes, just before there’s enough light to see your pins. Educated deer may be fooled by this and enter your area investigating the sounds. Remember, they are used to hunters rattling deer during daylight and may drop their guard thinking its a real fight. Once they are in your area and ten minutes pass, you’ll have enough light enabling you a shooting opportunity.

Establish the perfect environment and get ready

Remember that you are simulating two or more live bucks that are fighting. They grunt and they stink of strong tarsal glands. If you have fresh buck tarsal scent and have a grunt call, you can create a realistic environment that won’t alarm responding bucks. It doesn’t hurt to have a decoy or two out as well for visual reassurance.

If you rattle, peak the curiosity of a nearby buck, and give him a reassuring environment to walk into, your may just get the perfect shot at him.

If bucks are responding in your area, you have to make sure that you are ready for their arrival. This means be ready. Rattle and put down your rattling device quickly and get ready. No one wants to be surprised by a big ole buck while holding rattling antlers!

What to use for deer rattling

What you use is really up to personal preference. Its a delicate balance between sounding authentic and not being seen while rattling. The following are some systems to try out.

Real antlers offer, by far, the best sound when deer rattling. You can use different sizes for different scenarios.  Use your largest set of antlers for the rut. Use smaller antlers for prerut and less aggressive situations.

Smaller items like rattle bags and rattle devices like Knight and Hale’s Da Bone Head allow for good quality rattle sounds while allowing the deer hunter to be less visible while rattling. Synthetic antlers do work but we think if you can get away with using the real deal, you will sound better. 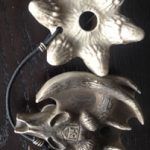 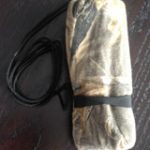 When and how should you rattle

If you are going to try deer rattling in the early season (yes, some hunters do), try using smaller antlers and tap the antlers together lightly, imagining younger bucks ticking and tapping; sort of as a greeting rather than a challenge. Remember that you are trying to peak curiosity with realistic behavior and the deer in the early season are not aggressive.

During the prerut and rut, bucks are naturally engaged in fighting activity. This is the time you want to put on your best rattling show. We advise rattling from a moderate to aggressive level. If the bruisers of the land want to be crown as king of your area and you set a proper stage, you may get a shot at that trophy of a lifetime.

Post rut deer rattling can be effective as well. This is due to the fact that not all does come into heat at the same time and some are left unbred after the first rut. When there are does to be bred, there will be competition between the bucks resulting in successful deer rattling.

Where should you rattle?

Learn from other hunter’s success

There are definitely different techniques that have worked for some, and not for others. That is not to say one technique is better than another.  The point is not to give up when a buck doesn’t show up – just stick with it and keep trying.  Most people don’t get a buck in and become impatient, and just plain give up. Have patience!

Your own experience will fine tune your approach for you. Study your hunting log from previous years to see when you had success and concentrate on that calendar period. After years of deer rattling and studying results, you will ultimately gain knowledge of the best technique to use and hopefully bag some nice trophies!