Elk, (Cervus canadensis),members of the deer family, are one of the largest land mammals in North America. Male elk are called bulls, females are called cows, their young are called calves, and yearling bulls are called spikes.

Bull elk can grow to weigh anywhere from 400 to 900 lbs on average depending on the subspecies and have an average length of 8 feet (nose to tail). Bull elk annually grow impressive antlers which can weight up to 40 lbs and grow upwards of almost 4 feet long. During summer months, a bull elk’s antlers can grow one inch per day. Cow elk can range from 300 to 600 lbs with an average nose to tail measurement of 6.5 feet. Elk, depending on sex and subspecies, have a shoulder height between 4.5 to 5 feet. Elk possess a 4 chambered stomach and can consume up to 20 lbs of vegetation a day. Elk normally live to be around 10-13 years old. 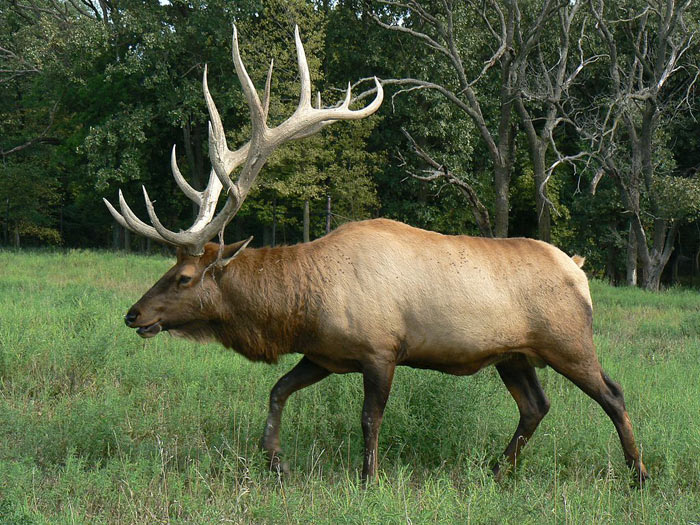 Elk meat is cherished as one of the finest of the big game animals. The average yield from an adult elk is around 200-250 lbs of meat (deboned). This fine table fare is actually leaner than beef and chicken and contains more protein.

Originating from the Bering Strait area, elk can now be found in North America, Asia, Argentina, and New Zealand. Due to a case of misidentification by early european settlers, they were given the name elk which actually historically means moose in many european countries.

Native americans referred to elk as wapiti which means light colored deer. The elk was an important animal to the native americans. Lakota tribesmen are given an elk molar (tooth often referred to as ivory) due to it being the last thing to decompose on an dead elk. It is supposed to represent strength, longevity, power, sexual power and courage.(1)

The 4 Subspecies of North American Elk

The Roosevelt elk were transplanted from Alaska to the Pacific Northwest in 1928. The Roosevelt elk, largest of all 4 subspecies, inhabit parts of California, Oregon, Washington, and the Canadian province British Columbia. These elk live in the dense, nutrient rich coastal rainforests. The rainforest environments provide excellent cover for the elk and the surplus of food enables them to reach the heaviest weights of all North American elk subspecies.

The tule elk, the smallest of the elk subspecies, are only found in the marshes and deserts of California. This very adaptive animal can survive extremely hot temperatures and arid environments with very little water. They like to inhabit marshes filled with a cattail like plant called tules, which is how they received their name. Tule elk have evolved to survive their environment and even possess an extra long row of teeth that help them to chew and digest coarse desert grasses and shrubs.

The Manitoban elk is found in the Midwestern United States and southern Canadian provinces. The second largest of the elk subspecies, the Manitoban elk barely escaped extinction in the early 1900’s.

The Rocky Mountain elk, the subspecies with the largest antlers, can be found in the Rocky Mountains and adjacent mountain ranges (2). Rocky Mountain elk have survived the settlement of man due to its adaptivity to mountainous terrain. These elk can hid out in the most challenging environments which have made them the most popular candidates for transplantation in other states. 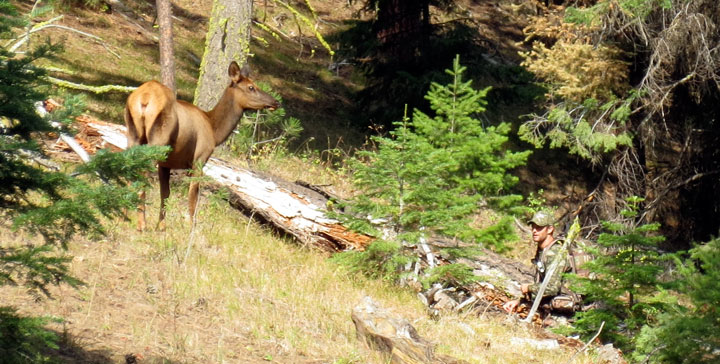 Elk are highly adaptive herd animals that thrive in forest habitats. Elk graze on various grasses, plants and bark. Elk will feed in both the morning and then hide out in dark timber to digest their food and to conserve energy. They will typically return to feed around dusk.

Elk will migrate for both comfort and food. During the summer months, elk will go high into mountains to take advantage of cooler temperatures. In the winter, they will migrate to lower elevations for shelter from bad weather and for more available food sources.

The Mating Season of the Elk – The Rut

In early fall, elk start their mating or rut activity. Bulls will separate from other bulls and start seeking out suitable cows to join their harem. A harem is a bull’s group of suitable cows that he will travel and eventually mate with. Harems can eventually include up to 20 cows during a mating season.

To attract cows, bulls will dig out watery marsh-like holes, lay in them and urinate in them. These stinky, murky mud baths are called wallows. The reason bull elk use wallows is to coat themselves with their own sexually pungent odor. By coating themselves with this extra strength stench, sexually willing cows can find them from a great distance with their noses.(3) Once bulls have cows in his harem he is very protective of them and will fend off other bulls.

Bulls will often bugle during the rut. An elk bugle is a loud vocalization that had different meanings depending on the pitch, style, and duration of the call. It can be used to scare off competing bulls and to attract cow elk.

Location Bugle – This is a simple bugle to locate other elk. It’s not an aggressive bugle and will lack grunts at the end of the call.

Challenge Bugle – The challenge bugle is more of an intense bugle that is meant to intimidate rival bull elk. Often times the challenge bugle will be accompanied by grunts or chuckles at the end as an exclamation point.

Spike Bugle – A spike bugle is a higher pitched bugle made by a young bull that might be foolishly testing the boundaries of a dominant bull.

Herding Bugle – This bugle is more of a coarse bugle that will round up cows that are straying from the harem.

Cow elk vocalize as well. They use their calls to locate, contact, notify, alert, and sexually attract. Cows mew and change the duration, force and vibration to deliver different messages. Listen to expert Steve Chappell as he demonstrates the different cow elk sounds in this video.

Now that you know a little bit about the animal, it’s time to continue your research. Lets visit some other pages in our elk section to learn about elk hunting strategies and calling elk so you will be on your way to success in the field this fall. Good luck!