The Story of My Passion

Growing up in the Texas panhandle, you quickly learn what life consists of: God, family and, for me, bowhunting. I, like many kids, started my archery addiction by shooting a recurve bow. Shooting the recurve was very fun and rewarding, but at the age of thirteen I decided I wanted to try a compound bow. I started saving as much money as I could and after a couple of years I was ready for my purchase. I went to my local archery shop on my fifteenth birthday and picked up the compound that I had been dreaming about. I spent the next 4 months leading up to archery opener practicing almost every day with my new bow. I wanted to be ready!

After what seemed to be an never ending wait, the opening day of deer season finally arrived. I had luck, and a lot of deer, on my side and got a shot at a doe. I released a perfect arrow that was a direct hit into the vitals of a mature whitetail doe at 20 yards. I waited like I had been told before climbing down to recover my first archery kill. After what seemed like an eternity I made my way to where the doe had been at the shot. I looked for 2 hours and never found any blood. I was devastated. I continued to hunt but without the same confidence I had before. I passed several mature deer because I wasn’t sure if I had the ability to take one down with my bow and arrow. After two months of unsuccessfully hunting, I decided it was time. I boosted my confidence by shooting perfect groups all the way out to 50 yards and decided to try my luck again on Thanksgiving afternoon.

During that afternoon, I  slowly made my way to my favorite stand, which happens to be less than a quarter mile from our house. I sat down and allowed myself to reflect on the events from earlier in the season. I knew I was a much better archer now but I had no idea if my luck was going to change for the better. Many hours passed before I saw my first deer. It was a buck and he was going to feed in the field I was hunting! 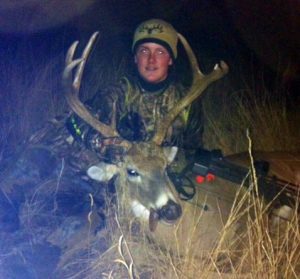 After establishing that the buck was clearly old enough to take and definitely had a mature rack, I began to control my breathing and focus on the task at hand. I knew how far the buck was but I didn’t allow that to faze me. When the buck had his head down, I slowly drew my bow back and nestled into my anchor point. I buried my 50 yard pin slightly behind his liver due to the fact that he was quartering away from me. When I felt I was rock steady and dialed in on him, I slowly drew one more breath in through my mouth. I relaxed my index finger over the trigger and silently pulled through my shot.

The arrow dropped perfectly into the back of his rib cage, destroying any chance of survival the deer had. He stumbled into the CRP field for another 40 yards before toppling over. I was overcome with emotion as the reality of this moment hit me: I had just shot a monster at 50 yards with a bow! Before scrambling to recover this magnificent animal I dropped my head in prayer to thank the good Lord for all his blessing. This is why I love bow hunting; because through all the whirling emotions it causes, it proves that Faith is always the one thing that will remain constant in my life.

Shootingtime.com would like to thank Hawks for the story of his first bow kill. If you or someone you know would like to share a similar story, please email the story along with pictures to shootingtime@gmail.com for consideration. Happy hunting!