It is important to get comfortable and confident using whichever call you choose. Whether it is a box call, slate call or mouth call, they all have their time and place. I suggest trying, buying and carrying various calls. It is not as important to be perfect sounding as it is to know when to call and when not to call.

When we get a turkey to gobble, it’s easy to want to keep calling at him. Sometimes we get aggressive with our turkey calling and it leads to toms hanging up just out of sight because they sensed a little too much aggression. With experience will come the trial and error knowledge of how much to call turkey and when.

The most important thing you can do during the off season is to master the turkey calls that you intend on using during the turkey season. Take the time to practice throughout the year and not just a few weeks or days before the season. Here are the different turkey calls available along with some turkey calling audio. 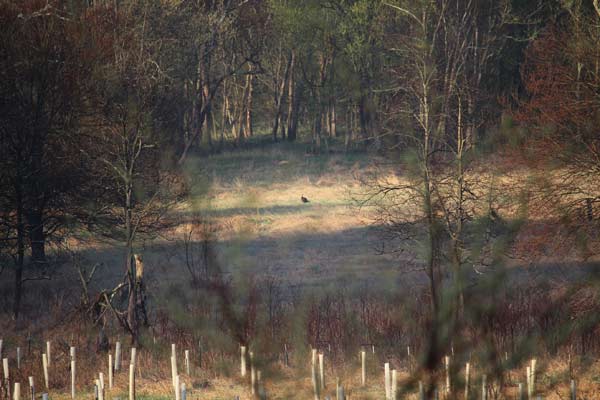 A big tom at about 100 yards looking at the decoys. Even at a distance you can see his large body and bright head. -Photo courtesy of Cody Hesseltine of Prodigy Outdoors.

The diaphragm turkey call is a simple insertable mouth call that is by far the most used call in my vest. I love diaphragm calls because they are very versatile in volume, and the variety of turkey sounds you can make with them. That being said, they also require the most practice to become a good caller with. I was probably 8 years old when I popped my first turkey mouth call in and I sounded horrible. The key to perfecting a call like the turkey diaphragm or turkey mouth call is to put the practice in.

As silly as it sounds, I had my best luck learning the diaphragm call or mouth call by watching videos of good callers and trying to mock the sounds that they were making. After countless hours of practice and upsetting everyone in the house I finally got it down!

One reason the diaphragm turkey call is one of my favorite turkey calls is because it is hands free. When calling, it’s in the roof of your mouth so your hands are free to control your gun/bow while remaining motionless. Make this one of your go to calls and you’ll be on your way to turkey hunting success!

A turkey box call is a turkey call that is constructed of two hinged wooden pieces that are positioned to rub on each other to give off lifelike turkey sounds thanks to friction created vibrations. Simply swing the paddle of the turkey box call along the top of the box with the right amount of pressure and tempo and you’ll be pulling toms in from a mile away!

I have probably called in less than a half dozen birds in my life using the box call by itself, yet I never go to the woods without one. Why? Because there is no better call on the market for reaching out to distant birds on a windy day. The high pitch and volume that you can get out of a box call is unmatched for communication with distant birds. Check out this popular turkey call for inclusion in your well rounded turkey calling arsenal.

The slate turkey call is a two part call that comes in all shapes, sizes and materials. A slate turkey call is used by moving a striker along the surface of a round disc that results in a variety of realistic turkey sounds via vibration. To find out what slate call is right for you, you’ll have to experiment with the many different kinds. I rarely use my slate call but I know several turkey hunters that solely use this call.

I use a gobble call as a last ditch effort when hunting a bird that won’t break and commit to my traditional hen calls. The gobble call is used to let a male bird know that there is another male bird in the area encroaching on his ladies. Sometimes, it might just seal the deal on a hard headed bird.

Both of these calls can be highly effective through the day. When the birds have gone silent, it is time to put some miles on the boots and to stop every couple hundred yards to try to get them to gobble. Once you located them with your locator call, then it’s time to plan your attack!

Clucks or cuts are often aggressive sounds that really get gobblers fired up.

Purring is often soft and subtle by itself but can be difficult on mouth calls but easy on slate calls. It can be before a series of yelps or added amongst clucks.

Fly Down and Cackle

A yelp Is the most common sound and easiest to make on all calls. It’s often done in a sequence of yelps from 3-5 at a time or coupled with another sound like a purr or cluck.

How Often Should You Call Turkey

When it comes to successful turkey calling, I would suggest calling half as much as you think you should. I still struggle with overcalling because having a bird respond to your calling is such an awesome feeling that you immediately want to answer. Developing the patience and learning to let a tom come into your call is even more amazing.

As a tom approaches his will be easily pinpointed by his loud gobbles but as he closes the distance or depending on his mood or hunting pressure he might approach silently.  Once he is about 75 yards away you will be able to hear him spit and drum which means that he is close. The spit and drum isn’t a very understood call but it will sound like “chit-fffffft.”

There is more to turkey hunting than I can put into words. My best advice is to watch videos and learn from the success of others. Get a turkey call in your mouth and start practicing now. Opening day will be here soon and it will take time to knock the rust off or learn a new turkey call. Have fun this spring and good luck!