Coming up with new innovations is an annual problem for bow manufacturers. We see “innovative breakthroughs” every year, but the specs rarely improve. The specs I am talking about are the axle to axle measurement (forgiveness), brace height (forgiveness) and IBO speed (performance). Seems like manufacturers are often stealing from the brace height and axle to axle length to give their new bow a few more feet per second… after that, they give it a new catchy name and wellah! There’s your new flagship bow! Not Prime. The engineers at Prime are always on the lookout for new innovative ways to deliver shootability, performance and comfort. The result of that hard work and innovation is the Inline Series of bows, which are new for 2022. In this review, we are going to take a look at what may be the best bow of 2022, the Prime Inline 3.

With the Inline 3, the specs are almost spot on with the Prime Black 3. No gains, but extremely respectable.

The axle to axle length of 33 inches is right at my personal sweet spot. Any shorter and you have to deal with more of an acute string angle which hampers ideal anchoring to the string. When longer than 33 inches, you start becoming too bulky for blind hunts and spot and stalk adventures.

The 6.5 inch brace height is on the performance side of brace height measurements. Prime strays from the default 7 inch brace height which is pretty much the standard comfort brace height, but you won’t really be able to tell. The added 1/2 inch of power stroke is well utilized which is apparent by the 337 FPS speed rating.

The weight of 4.4 lbs is average for a bow of this caliber. The Prime Inline 3 is well built and does not feel cheap in the hand.

The draw length is extremely adjustable ranging from 26 inches all the way to 30.5 inches. No more draw length specific cams of yesteryear!! This is a great feature which allows the owner to really dial in their draw length.

Features of the Prime Inline 3

Let’s look at what sets the Inline 3 apart from Prime bows of the past. 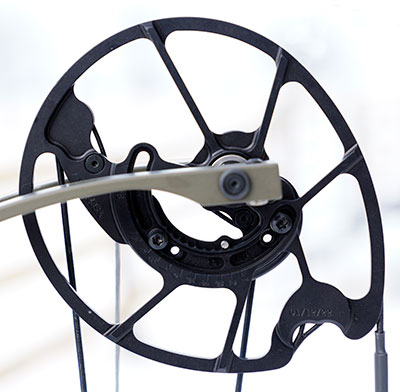 The engineers at G5 Outdoors/Prime simplified the parallel cam system down to an ingenious new inline cam system. The new inline cam system eliminates the added string yokes, cuts down on cam size/mass and still addresses neutralizing cam lean. One thing that is different is the sole use of one limb stop that resides on the bottom cam. This seems a little foreign after shooting Primes of the past, but it delivers a great hard back wall. Instead of flooding you with more words on the cam system, lets check out a great video by one of Prime’s lead engineers, Scott Prater, for a thorough explanation.

The grip used on the Prime Inline 3 is a nice improvement compared to their grips of the past. The composite grip is thin and ribbed which provides a torque free surface that will seat against your palm without a chance of slippage. The Nanogrip utilizes an Aerogel base, which was created by NASA, that will provide a barrier against a brutally cold riser. Prime claims that the longer you hold the bow, the warmer the grip will get. We tested this by simply grabbing the bow and holding it for ten seconds and then recording the surface temperature of the grip and the adjacent aluminum riser. The measured temperature of the grip was 8 degrees warmer than the aluminum riser, 68° compared to 60°.  This feature will make those arctic sits much more bearable! 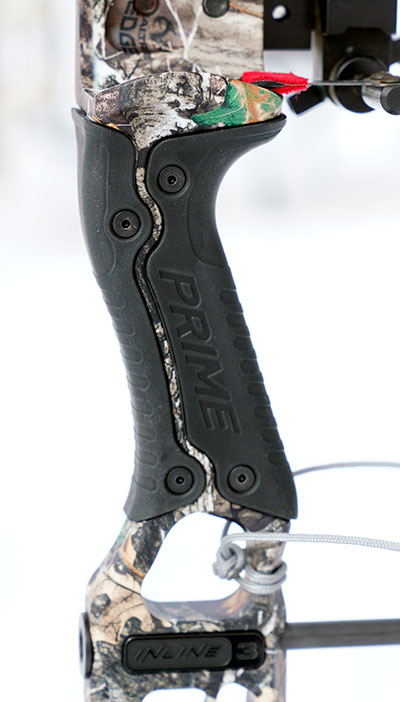 The new integrated dampener system is an excellent new addition that will ensure the already “dead in the hand” shot is also vibration free. This feature makes the Inline 3 one of the quietest Prime bow that we have ever shot. 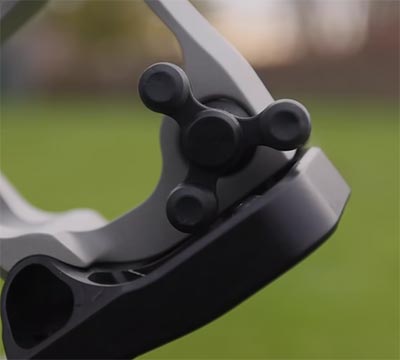 The Performance of the Prime Inline 3

Lets put this bow through the ringer and see how it does!

The wide range of draw lengths are pretty accurate for the Inline Cam system. We found the draw lengths to be all within 1/8 of an inch which is excellent and very accurate when compared to many competitor’s bows which normally come in long by at least 3/8 to 1/2 of an inch.

The draw cycle is somewhat demanding compared to some of it’s competitors but very similar to Prime bows of the past; so if you’re used to shooting Prime bows, this draw cycle is par for the course. 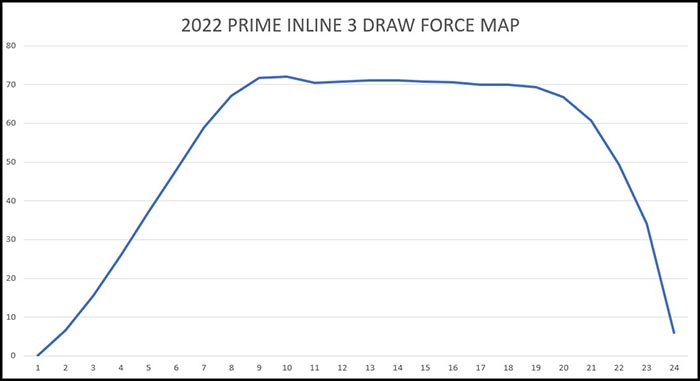 At 30 inches of draw length and 72 pounds of draw weight, our 350 grain arrow came in at 327 FPS. This is 10 feet per second slower than the advertised 337 FPS but that is probably due to added weight on the string (d-loop and peep sight). Overall, we think it should have been 5 feet per second faster than our recorded results. 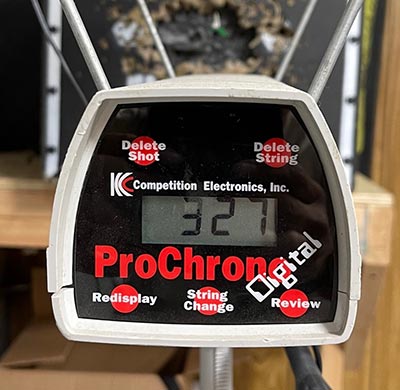 Like the Prime bows of the past, the tunability of the Inline 3 is a strong point. Primes have been know for their almost non-existent bow torque which results in very little lateral nock travel during the shot. This allows the Inline 3 to shoot a variety of arrow spines without compromising arrow flight.

Once the bow is in spec, rest is set at 7/8 of an inch off the riser, the arrow is centered on the berger hole and the timing marks are all inline, you shouldn’t have any issues. If you do experience a slight left or right tear, you have to get a set of shims from your Prime dealer.

The Prime shims come in 3 sizes. Dealers will have a tool which allows them to change the shims without pressing the bow, but if you do not have the tool, the shims are changed out using traditional methods.

Our Thoughts on the Prime Inline 3

This bow is a great bow to shoot. The new technology of the Inline 3 once again puts Prime as a frontrunner when it comes to tunability, feel and performance. The Inline cam system, Nanogrip, and integrated dampening system are great improvements unlike many of its competitors which are basically last year’s bows with slight alterations and a new name. It is always a pleasure to see what the meticulous engineers at Prime come up with and this year, they did not disappoint. If you are in the market for a new bow in 2022, definitely give the Prime Inline 3 a shot! For more information, visit https://www.g5prime.com/.

The Prime Inline 3 is a great flagship bow for 2022. The Inline 3 really delivers a rock steady hold and features some awesome additions making it a step above the previous years models. Top quality components and superior engineering makes the Inline 3 a bow to try if you are in the market for a new bow.