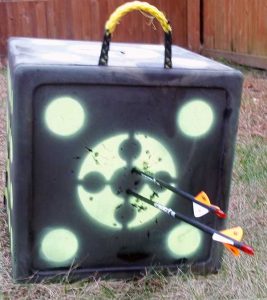 The Rinehart Rhinobrute archery target is a block target that measures 16″x16″x16″, weighs approximately 23 pounds, and  retails for around $180. The price for the Rinehart Rhinobrute is a little expensive, but after you’ve owned it and used it for a while, you’ll understand why. I used to be the archer who opted for the cheaper “compressed layer” block target. I would spend $50 on a target that would end up getting tossed after 3 months of shooting. After buying and using about 5 of the old style box targets, I wised up and picked up the Rinehart Rhinobrute. This target is extremely durable and the “self sealing” foam allows the target to keep its form shot after shot. This target should be with me for quite some time.

After shooting one side repeatedly, simply turn the target around, over, up or down and begin shooting another side. The target also has a very durable handle incased in the foam. With the size of the target and the durable handle, transporting the target from home to anywhere is convenient. The target can fit in the trunk of a car or the back of an SUV or truck.

Performance and Durability of the Rinehart Rhinobrute target 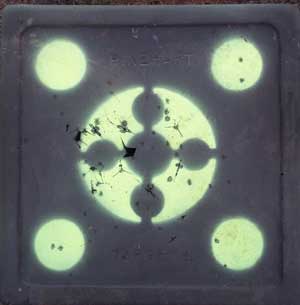 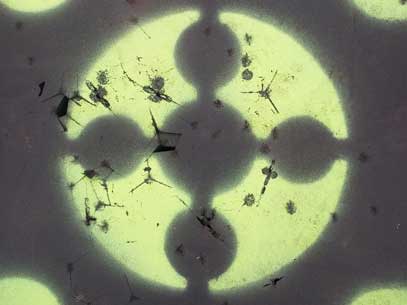 When I began shooting the Rinehart Rhinobrute,  the arrows were a little hard to pull out. After repeatedly shooting the target, the foam eased up and the arrows were easy to pull out. I also have left the Rinehart Rhinobrute outside since I received it. The target has been through a normal Illinois weather system: rain (torrential down pours at times), sun, frigid cold, and snow. The target has held up in the conditions and looks exactly like the way it did on the first day. The colors have not faded in the sun and the target has not become waterlogged like most compressed block targets. I’ve shot this target at ranges from 10 yards to 70 yards. The highly visible color of the large shooting zone, allowed me to hit my personal best at 70 yards.

I would recommend this target to anyone that loves to shoot a bow. The target is very durable and dependable. The target can be used indoors and outdoors, and at any kind of shooting light. For more information, visit Rinehart’s website.


Pros and Cons of the Rinehart Rhinobrute