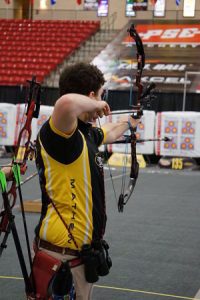 On February 8th, 2015, Alex Wifler won the biggest archery tournament of his life, the 2015 Vegas Shoot. It didn’t come easy though. After 3 days of shooting, the field of 262 archers was narrowed down to only 17. The remaining archers earned the right to move on by scoring 900 of a possible 900 points.

In the 17 man shootout, the scoring rules changed. The inner X of the Las Vegas targets would count as a 10, the next ring a 9, and so on. In the shootout, each archer would shoot 3 arrows with 30 being the highest score possible.

In the first shootout round, only 7 of the 17 archers remained perfect with a score of 30. In the second shootout round, of the 7 remaining archers, only Alex Wifler (Mathews) and Levi Morgan (Elite Archery) shot perfect resulting in a 2 man shootout.

In the final shootout, Levi Morgan missed the X ring (10 points) with all three of his arrows and ended up with a total of 27 points. Alex landed one in the X (10 points) and two outside the X (9 points) ending up with a 28 points and winning the tournament.

It was truly an unbelievable shootout win by a 20 year old Chicagoland kid who had only just recently switched to shooting a compound bow. The big win was a big pay day as well for Alex. He received $30,000 for the win and received $30,000 as a bonus from his sponsors.

Here is the full length video of the 2015 Las Vegas Shoot. Fast forward to minute 28:00 for the start of the shootout between Alex Wifler and Levi Morgan.

We had the privilege to interview this up and coming world class archer, Alex Wifler.

Shootingtime.com: Alex, where are you from and where were you raised?

Wifler: I was born and raised in Crete, Illinois.

Shootingtime.com: How old were you and how did you get your start in archery?

Wifler: I got my start at the age of 11 after watching my cousins shoot their bows. I thought it was the coolest thing I had even seen.

Shootingtime.com: Do you partake in any hunting?

Wifler: Yes, I love it. I started two years ago and haven’t had too much success, but I’m hooked.

Shootingtime.com: When did you start shooting competitively?

Shootingtime.com: What kind of bow did you start shooting?

Wifler: I was exclusively recurve for the majority of my career. I was even in Korea 4 years ago training for the Olympics but everything changed when I broke one of my fingers. When that happened I pretty much left the recurve and started shooting the compound.

Shootingtime.com: How often do you practice?

Shootingtime.com: What equipment do you use?

Shootingtime.com: Where is your home shooting facility?

Wifler: My home facility is On Target in Steger, IL.

Shootingtime.com: Do you do all your own tuning?

Wifler: Absolutely. I think its very important to be able to work on your own equipment. I absolutely love the adjustability on Mathews bows and I’m very excited to get the TRG 7 and set that up for outdoors.

Shootingtime.com: Who did and do you look up to in the archery industry?

Wifler: I really look up to Reo Wilde. Reo is one of the best guys in the industry. Really down to earth and personable. I also look up to guys like Jesse Broadwater and Brady Ellison. Those guys are also extraordinary in what they do and down to earth as well.

Wifler: It was unbelievable, overwhelming… I wish I could have bottled the moment. All of my hard work had paid off. There I was in front of thousands of people, the 2015 Vegas Champion….  its almost indescribable. Truly one of the greatest moments of my life.

Shootingtime.com: What’s the best advice you can give other shooters young and old?

Wifler: Practice… focus on every arrow. Never give up and keep practicing. Also, know your equipment.

Shootingtime.com: What are your goals and plans for the future?

Wifler: I’ve made the decision to make archery my profession. I plan on practicing as much as I can and to do the best I possibly can.

We would like to thank Alex Wifler again for doing this interview with us. Alex is not only an extraordinary archer, he is an ambassador for the sport. Alex says he is interested in doing what he can do to help grow the sport of archery and we here at shootingtime.com love hearing that. Hopefully his success continues and he becomes the new face of competitive archery. 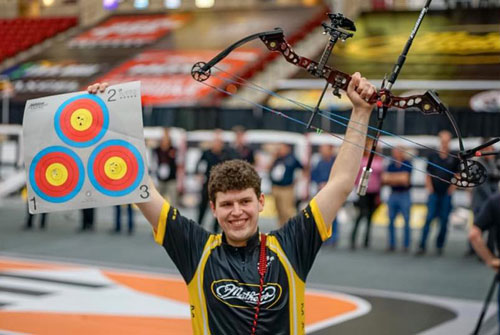