Most hunters have never seen an antlered doe, in the flesh anyway. But, every now and then a photograph surfaces on social media or in a magazine, depicting a hunter who shot what he or she believes is in fact an antlered doe. Or, is it?

Does with antlers do exist. There is even research to suggest that while not exactly a commonplace in deer herds, does donning head bone may occur more frequently than we think. However, many times, a deer that a hunter believes is a doe with antlers, falls under an entirely different classification. But, the science here is fanatically complex, and good research is hard to come by; especially when you consider that a large portion of whitetail studies are conducted in a controlled or semi-controlled environment. Oddities in wild deer herds are usually confined to intermittent observations that involve cases which don’t offer any form of comparison, documented, or verifiable data.

Types of Antler Abnormalities in Deer

There are always exceptions to the many rules of Mother Nature, but traditionally, a deer that exhibits hormonal, reproductive, and/or sexual abnormalities, falls into one of three categories: Hermaphrodites, Pseudo-hermaphrodites, or a bona fide antlered doe.

A true hermaphrodite has both male and female internal sex organs ovaries and testes. However, there are numerous combinations concerning the makeup of the sex organs and their location in the body. Outwardly, it’s possible for a hermaphrodite deer to have either male or female external reproductive organs. Alternatively, the animal may simultaneously possess both male and female external sex organs.
A hermaphrodite is the direct result of a genetic defect, meaning that there were problems with the formation of the X or Y chromosomes. Deer with this peculiarity are incapable of reproducing. Further, because a hermaphrodite has at least partial male sex organs, it will often yield hardened and polished antlers due to inherent male hormones present in the body.

Otherwise known as cryptorchid males, the term pseudo-hermaphrodite also illustrates an intersex condition in which sex organs are anatomically incorrect. With this disorder, deer possess the internal reproductive organs of one sex, but external genitalia that resembles the opposite sex. The extent of any determining characteristic in an individual deer can vary.

The Phenomenon of Antlered Does

John Ozoga, a deer research scientist of 37 years, describes several traits and possibilities of a true antlered doe in his book, Whitetail Intrigue. Ozoga says that doe antlers have been described as velvet-covered pedicles only, small button antlers, small velvet-covered spikes with occasional branching, and hard polished antlers-which usually occur in bucks. Ozoga also notes that European researchers found that the size and characteristics of doe antlers differed depending on the condition of the deer’s reproductive tract. “Does with ovaries for example, showed the least amount of antler development,” says Ozoga. 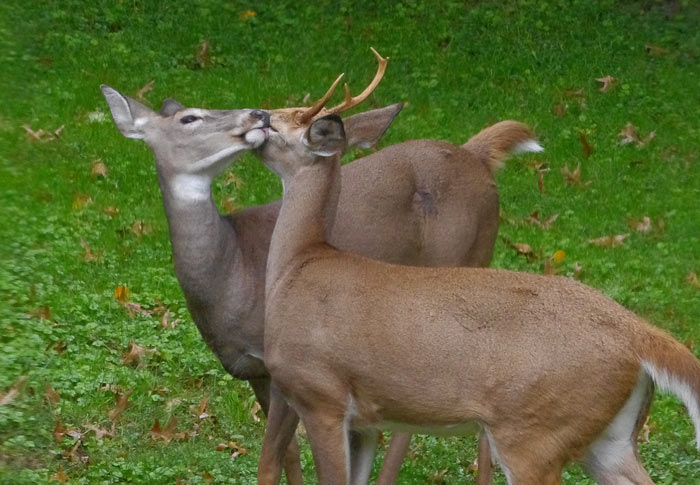 Ozoga goes on to add that, “some antlered does are capable of breeding, carrying fetuses and rearing fawns, and some are not. Generally, fertile does carry velvet-covered antlers.” Likely, this is because they don’t produce high enough testosterone levels to promote antler hardening and velvet stripping.
Classically, a doe carrying hardened, polished antlers implies severe reproductive problems. However, in most circumstances mature antlers would be indicative of a hermaphrodite or pseudo-hermaphrodite-anomaly.

The Intrigue of the Unknown

The fact is that when it comes to reproductive oddities in whitetails, more is unknown than it is known. For those of us without degrees in science-related fields, this topic is overwhelming and confusing at best. That said, when you think about it, there are tremendous informational deficits when it comes to free range deer in general. However, we’ve made exceptional headway in our quest to understand incredible whitetail deer. And, isn’t that quest the very thing that fuels our hunting lifestyle?