We made our way to our hunting spot across a creek before first light. My friend Andy had to leave by 8:30 for a gymnastic meet in Denver. We were treated to another incredible Colorado sunrise; it’s always a sight to behold. I’m in awe and humbled by the natural world that surrounds me.

The Turkeys had roosted a few hundred yards away and we hoped to call them in. Andy set up 2 decoys and we started calling. I started thinking about my father my thoughts always seem to gravitate to my amazing 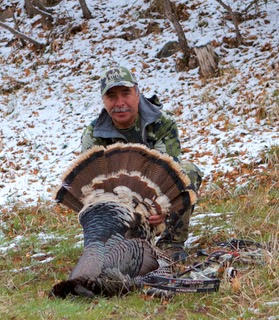 father. We got an immediate response especially from a few very vocal hens followed by the Tom’s gobble. They were moving our way then they stopped calling. One hen was all that came by that morning.

We left and I used my binoculars to see if I could spot them and I watched as the Turkeys made their way up the steep slope of cedars and pinions pines. My thoughts went back to my father. Last November he had a stroke and now he is not the same. He needs constant care so we made the hard decision to move him and my wheelchair bound mother to a Veteran’s facility in Rifle Colorado. Which is only 25 miles from where I was hunting. So I headed my truck west and spent the rest of the day with my parents.

My 94-year-old father seemed to understand and kept asking about the turkeys and the elk we hunted. He is my hero and I’m so very thankful that he taught me to respect and to get to know the wild places and the wildlife that surrounded our mountain home. 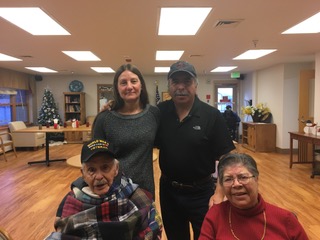 The author along with his family, including his father who has been his mentor and is a war hero.

I headed back the next morning alone and for once the weatherman was right. I drove thru rain and blinding snow. I went later to glass the cottonwoods for roosting Turkeys and there they were in about the same place. I set up again in the same area and started calling and again got an immediate response. But this time they seemed to be moving away. So I decided to move up thru the steep cedar and pinion pines intermingled with tall sage.

Another Tom called above me. It called again and seemed to be holding in the same area so I moved to its level and moved in slowly. I called quietly and a few minutes later I could hear the quiet clucks of the hens as they moved towards me. Suddenly they were there about 16 yards above me. I spotted the Tom and drew my bow as it moved into an opening. A hen moved in next to it and I had no shot. I followed their tracks in the newly fallen snow but knew my chances were very slim.

Hunting Turkeys with a bow is difficult especially when you don’t use a blind or decoys. I hunt them the same way I hunt Elk. Using the spot and stalk method. Calling and moving in for a shot. I’ve taken 3 Turkeys using 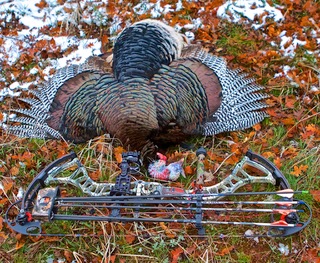 this method with my bow. The call of the Turkey reminds me a lot of Elk. Both represent their species so well, both echo the call of the wild things that we love so much. And hunting them is so much like hunting Elk. It’s exciting and rewarding. I’m not the kind of hunter who can stay in a blind. I don’t even own one. Each successful Turkey hunt has been by locating them and calling them to me.

I looked to the West and had to chuckle that damn weatherman was right. A heavy snowstorm was heading right at me. By the time I got to my truck everything was white with snow including me. There was no wind and the big wet snowflakes fell slowly it was beautiful. I was thankful for my KUIU gear and Kennetrek boots. Great gear makes the difference between a successful hunt and one that is a failure. A strong mental attitude is key. Especially when the going gets rough.

Spring storms in Colorado are usually short-lived affairs. With intermittent snow or rain. This storm lasted for about 30 minutes cleared for about 20 then heavy snows again. I knew that it would break and it did about 2 hours later. I decided to move about one and one half miles up the creek with hopes that the group of Turkey would keep moving in that direction.

I set up behind 2 large cottonwoods where I could see the creek below. I started calling and was rewarded with a call from a hen. I called again aggressively and the Tom answered. They were about 200 yards away and I kept up my aggressive calling and the Tom would answer.

It took about 30 minutes before I spotted the first hen. I had a space about 20 yards wide and knew they would have to cross it. The first hen appeared and I ranged her at 42 yards. A long shot but one I felt confident in making. The Tom strutted in I drew my bow and settled the 40 yard pin just above its back. The arrow was true and the Tom fell right where he was. A quick and ethical kill, its something we should all strive for. From my elevated position I was able to watch the flight of the arrow as it arched its way to the Tom. 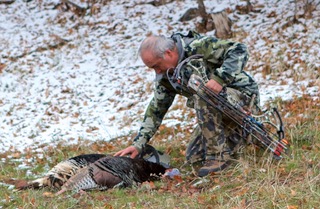 I thanked God for my health, my family, this day and this special gift that God and Mother Nature bestowed upon me once again. I knelt at its head and with bowed head thanked it and promised that I would honor it with respect. I thought about my father and as I walked back to my truck with this beautiful Tom. I admit I had a tear in my eye mixed with a tinge of sadness. Always wanting my father by my side.

Before I reached my truck another spring snowstorm big wet heavy snowflakes once again covered the Turkey woods and me. As I headed home I felt a sense of accomplishment hunting Turkeys the hard way is so rewarding.