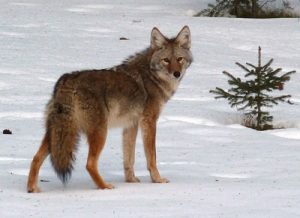 Coyotes are some of the toughest animals to hunt. They are smart. They are cunning. If they are aware of you, your hunt is pretty much over. Having a solid coyote hunting strategy and knowing our coyote hunting tips will increase your chance of success in the field.

Although coyotes can be hunted successfully during the day, the coyote hunting that we primarily do is at night and after a decent snowfall. If there is a blanket of snow on the ground and the moon is cooperating, visibility while hunting coyotes at night is not an issue. Although coyotes are often spotted looking for food during the day, they are primarily nocturnal hunters. With the right preparation, strategies, and execution, hunting for coyotes at night can be an exciting and rewarding challenge.

It’s important to dress for success when hunting coyotes. Although coyotes have phenomenal hearing and a great nose, their vision is what will bust you every time. They will spot the slightest movement and can pick out an contrasting, out of place object in a heartbeat. You must try to blend in with your environment. If you’re going to hunt in the snow, wear snow camo or something white. If you do not have snow camo, try to sit in or by something that matches what you are wearing.

Where to set up for coyote hunting

Even with a nice blanket of snow and a good moon that is illuminating the sky and ground, visibility is still a challenge. Due to subpar lighting conditions, it’s best to set up in areas that are clear cut, leaving you with a large white foreground in which coyotes will stick out. We suggest to look for low cut grass fields, cut corn or bean fields, frozen ponds, lakes, rivers, or creeks. If you are having a hard time finding a nice clearing to hunt, try to find an elevated spot to hunt like a treestand or a hilltop. When elevated, bushes and weeds are less of an obstruction due to the surrounding snowy areas. The ultimate key is being able to see the approaching coyote or coyotes for a successful shot.

How to play the wind while hunting coyotes

If you have ample clearings available to hunt, you should consider playing the wind in order to avoid getting busted by coyotes. Wind carries scent and sound, which plays to two of the coyote’s best senses. If you can approach an area with the wind in your face we believe you will increase your chances of success tenfold.

Before heading out on a coyote hunt, know what the coyotes are likely to be feeding on in the area you are going to hunt. For our area (Midwest), a crippled rabbit call is a common call to use. If you are going to hunt a farm that has chickens, a crippled chicken will definitely do the trick. What you are trying to do is to replicate a sound that the coyote has linked with food. 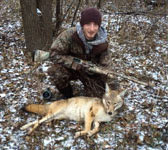 Setting up for a successful coyote hunt

If you have a coyote hunting spot picked out that offers great visibility and has a favorable wind, the next thing to do is set up properly. Like with many other hunting scenarios, you want to sneak in to your coyote hunting spot silently and undetected. When you get to a good area to hunt, you should make some lightning fast observations. Look for a spot to sit that offers concealment and look for an ideal place to put your call. One thing you don’t want to do is take your time. You just don’t know when an extra minute of setup will be the cause of coyotes getting spooked.

If you are using an electronic call, you have two choices of setups: manned and unmanned.

In a manned setup, a hunter will be at the call during calling. While calling, the caller can cover much more ground by turning or oscillating the electronic call while its playing. Coyote calls work with a megaphone type speaker which is extremely directional and by spreading out the sound you may pick up a coyote that wouldn’t have heard the call if the call was stationary.

When hunting with another hunter, it is advisable to have the second hunter around 50 yards downwind of the caller. This strategically placed hunter is in a great position to spot and shoot coyotes that are trying to precautiously sneak downwind of the caller while investigating the scene.

In an unmanned setup, try to quickly set the call and locate yourself about 20 yards downwind. If you are using a high powered rifle instead of a shotgun, you can increase the distance. While hunting a two man unmanned setup, its not a bad idea for one hunter to have a rifle and the other to have a shotgun. The rifleman can take down coyotes at a distance while the shotgunner can blast blitzkrieging coyotes that charge the call at a fast pace.

Coyote hunting success is affected by a little bit of luck. When you approach a coyote hunting spot, coyotes may already be on the hunt and you have no idea where they are. Since they are often on the move, we advise calling for at least 20 minutes. By calling for an extended period of time, coyotes that were initially out of hearing range at the beginning of calling have a chance to enter range. We have had coyotes charge the call within 30 seconds and have had them cautiously approach much later during our calling…. you never know.

The coyote hunting keys to success are:

The following image shows how oscillating or turning the call and the coyotes location can be a factor in success. 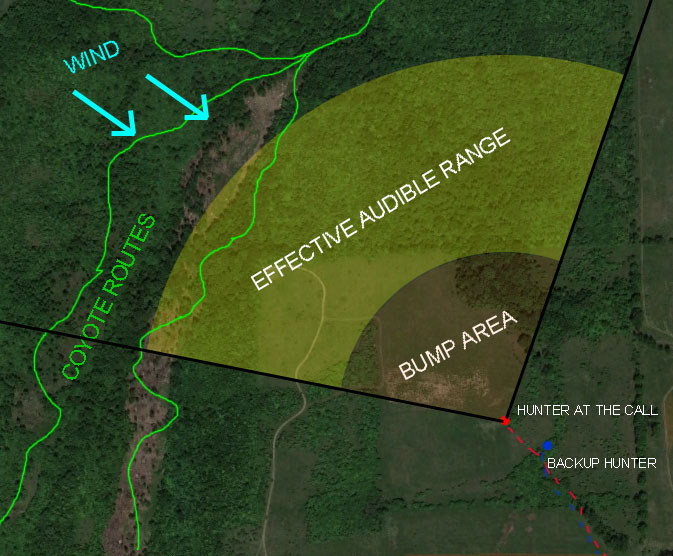