Coyote hunting is one of the biggest challenges any hunter can face. The coyote, a.k.a. Canis latrans,  has earned the nickname of “wily” which means clever; full of tricks. Let’s learn a little about this wily predator. 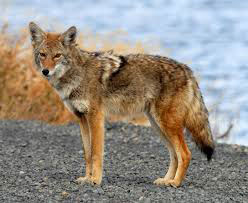 The Coyote is a predator that is native to North America and weighs in at anywhere from 15-45 lbs. This descendant of the Grey wolf is an omnivore, which of course means its a carnivore and a herbivore. It will eat plants, vegetables, fruits, and other animals. The coyote’s pack revolves around a central reproductive female. Reproductive monogamous females are courted mid to late winter and give birth around 60 days after conception. The pups, who come from an average litter of 6, reach their adult size at the age of 8 months.

Coyotes, in most parts of the country, are a “top of the food chain” predator; meaning the only elements that can take them down are their environment and man. They are extremely adaptive to changing landscapes and they seem to increase in numbers exponentially year after year. Coyotes have negative effects on many different animal populations. Rabbits, pheasants, turkeys and deer are just a couple of animals that the coyotes threaten. Coyotes also push other predators like the Red fox out of suitable habitats. They are also a constant threat to various livestock and fowl that farmers raise. It is pretty much beneficial across the board to keep the coyote population in check. How can we do this? Coyote hunting of course.

Coyote hunting season, in many states, runs all year. There are usually very few limitations regarding what weapon you can use and night hunting is normally permitted. Although often spotted in the middle of the day mousing in a field, coyotes prefer to hunt at night. For this reason, optimal coyote hunting hours normally range from dusk til dawn. 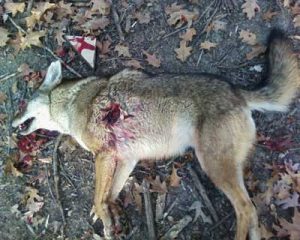 While coyote hunting, most hunters use an electronic call. Coyote calls have advanced greatly since the days that the “Johnny Stewart” game calls dominated the market. With today’s digital technology, coyote calls have gotten lighter and store more sound files than their older counterparts. One coyote calling option is to try to locate coyotes by playing a howling/barking sound file. If coyotes are in the area, they may answer with a howl of their own, giving away their location. Once you have their location, you can close in. Once in a suspected range of feeding coyotes, coyote hunters may use sound files such as a crippled rabbit or chicken to bring them out into the open. Typically if a coyote is within hearing distance of the call and all factors are in favor of the coyote hunter, there may be some quick action. I have seen coyotes respond to calling anywhere from 30 seconds to 15 minutes. Its kind of being in the right place at the right time.

Coyote hunting is not a simple task though. The wily coyote will often circle a call downwind and bust a hunter. They also often times have a 6th sense that tells them when something is wrong. Whether its the volume or quality of the call, the environment you’re calling in, the lack of motion of the “cripple rabbit”, or just that something smells funny, coyotes can stop on a dime and head out of Dodge. The following is an example of how tough coyote hunting can be.

One day I was in my treestand at the end of an afternoon sit for whitetails and decided to try to call a coyote. I took my hand call and started to wail like a crippled rabbit. Within a couple of minutes I saw two coyotes headed right at me! I had to put the call in my pocket and get ready to shoot. As they entered the woods, the lead coyote slammed on the brakes and locked on to me with his eyes and then left in a flash. I was baffled. I was wearing good camo. I was silhouetted against the tree. I was 20 feet high in the tree. All I did was move my hand 3 inches. What wouldn’t have made a difference in the world to any deer (located where the coyote was when I made my movement) was picked up by the coyote as if I were waving a flashlight at him. This occurrence was just one example of how clever and tough to hunt coyotes are.

Other coyote hunting tactics are also used. Tactics like “drives” have been used to flush out and kill coyotes. I have even heard of a very successful hunter who used his female dog to attract coyotes. He tied her to a stake and would kill the coyotes as they tried to get a piece of his hot dog!

Whether you’re a first timer or not we wish you luck while pursuing coyotes this season. Please check out all of our coyote hunting pages for tips and tricks that just might make the difference for you this coyote season.