Growing up as a little boy and learning the ropes of hunting from my father has been a journey that plays over and over in my head every single day of my life. Lessons learned afield, in my eyes, will bring a man far closer to the man amidst the pearly gates than that of any a child will ever learn in between school bells. For me, hunting has always been a part of who I am, and for that, I will never show any shame.
Whitetails have and always will be my true love. To pursue them, learn from them, get defeated by them, and to occasionally defeat them, hunting whitetails with a bow and arrow is unlike any other sport on the face of this earth as far as I am concerned. 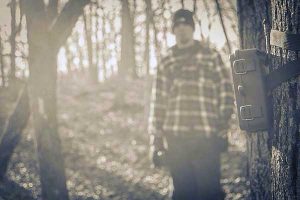 The first 13 years of my hunting career were spent in the rolling hills of west central Wisconsin. Although many seasons would come and go, and a lot of my buck tags were sliced thin and served as soup, it wasn’t killing that was always important. At the end of every day I was fortunate enough to spend in the outdoors, I was winning. Every outing, every sighting, every day I was skunked from the stand, I was learning from God, I was learning about myself, and I was learning the ways of the whitetail deer that was I pursuing.

With the passing of every season, whether it resulted in a full freezer or not, I was becoming more and more knowledgeable in what was now becoming more of a profession than a hobby. I take pride in what I have learned. Every individual has something that drives them, I have mine as well.

In the spring of 2013, my fiancé at the time, and myself decided to move to Iowa. Why Iowa you might ask? It takes 3, if not 4 years for a non-resident like me to draw an archery whitetail tag in the state of Iowa. Iowa deer hunting was reason enough to pack our bags and head to the whitetail “mecca-state” of the country.

That spring and summer consisted of me driving hundreds upon hundreds of miles across back country roads and knocking on doors, hoping…and praying that someone would grant us permission to chase whitetail deer on their property. I journal everything, and this was no different. I knocked on 96 doors that season, 85% of which wanted nothing to do with me and asked me to leave their property. 12% of these landowners at least gave me the time of day and invited me in for coffee and exchanged hunting stories with me before denying my requests because they too, or their children/grandchildren enjoyed hunting their property. That leaves us with 3%…I was blessed to have met a few farmers/landowners that could see in my eyes that I was loyal to the sport of hunting and that I would treat their land as if it was my own dirt. 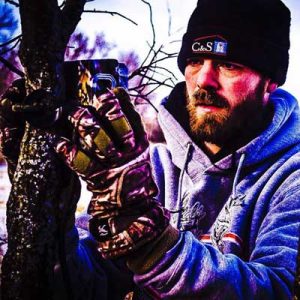 Fast forward to this fall, the fall of 2014. I had been busy with running camera for a good friend for the better part of the season and because of that I had not had the time to get out and hunt on my own accessible ground up until November 15th. On the morning of November 15th, I headed into a small 60 acre parcel that I had permission on. I had never hunted this piece; only had my trail cameras there over the past couple of months. After speed scouting the acreage in early July, I had picked a natural funnel between a large pasture to the west and a considerably large pond to the east. The terrain funneled the deer on a timbered hillside between corn fields to the south and a large tract of timber with great bedding to the north. On an aerial, and from the little that I had seen with my own eyes, this spot was fixing to be a great one for intercepting cruising bucks in November.

The action didn’t disappoint, the first morning brought several sightings of bucks chasing does back and forth amongst us as we sat patiently in our stands. The action slowed down near midday and a front blew in and with it brought a heavy, damp, steady falling of snow. By mid afternoon, we were forced to pack up because we were soaked from head to toe and were also worrying about saving camera gear. We left the stand that afternoon and couldn’t wait until we could get back in there.

The wind was wrong the following morning to hunt the funnel so we were forced to try a different set on a different piece. We had a great morning and saw a couple of nice bucks but when the wind switched for the afternoon we knew where we wanted to be. We climbed back into the funnel around 11am and planned on sitting it out until dark. About an hour before dark we caught a glimpse of a mature buck cruising the opposite hillside across the valley. We could never get a great look at him through the binoculars as he was covering ground steadily, but we could tell that he was a solid deer. With nothing to lose, I grabbed my rattling antlers and began rattling aggressively. After mimicking a fight for about 45 seconds, I hung up my antlers and began glassing the hillside profusely where I had last seen the buck. Two to three minutes went by and we couldn’t see anything; it was beginning to bother me that we had no idea where the buck had gone. Out of nowhere, he stepped out from the timber across the valley about 200 yards away and began on a trot towards our ambush. 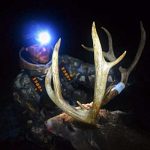 Adrenaline was pumping at this point, I had my bow in my hand, in the treestand, for the first time this season and everything was going as planned. The buck entered the timber on our hillside about 90 yards below us and began to work towards the top of the hill looking for the fight. He came within 35 yards but presented me with no opportunity at a shot. When he couldn’t find the fight, he turned and started angling back down the hill. For an instance, I thought he was going to wrap the hill right below us and give me a 15 yard chip shot…nope. He began angling away and now at a sharper angle. He was heading back down towards the pond now and at a steady clip. The buck crossed an opening at 45 yards when I grunt-stopped him. I was already at full draw with my kisser button nestled calmly in the corner of my mouth. I took a deep breath, remembered all the times I had made shots just like this one on the range, and I squeezed the trigger on my release.

I watched my lumenok as it arced down the hill and buried into the rib cage of the quartering away buck. The buck bolted towards the bottom, my arrow kicked out about 15 yards after the shot. The buck was hit hard and I could tell that I had gotten the offside shoulder as his right leg was flopping as he set out across the hillside. He ran about 75 yards before he was out of sight.
My cameraman and I were in awe, did that really just happen? The excitement is unspeakable to someone that has never been in that moment before. All the hard work and all the sleepless nights come down to a moment like this one, and it is up to you, and it is up to me to make sure to conquer those moments, because we very well know, that they don’t come often.
After watching the footage back, we were confident in the shot but still wanted to air caution to the wind so we headed back to the car to wait a couple of hours before getting on the trail.

The blood trail was good, and it was steady. It was a 200 yard track job uphill before we found the buck expired right in the middle of a hellacious deer trail. I have shot several deer with archery tackle in as many years, but never have I found a deer dead on a trail. They 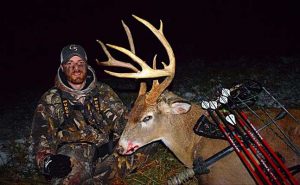 usually veer off into thick brush and do funky things before they are down for the count. This time was different, it was almost like the buck ran and would not give up until he was literally out of gas. For a whitetail to run uphill for 200 yards on 3 legs, 2 punctured lungs, and a clipped heart. I was blown away. These animals have such a will to live that it is simply admirable.

After several minutes of gazing at the beautiful buck and thanking the good Lord for the opportunity, it dawned on me once again why I love this great sport of bowhunting. It’s not the kill that keeps me coming back; it is the life lessons learned from pursuing such an amazing animal and spending that time with great friends. For all the times that I have been defeated in my career of hunting, I didn’t look at it as a loss. Instead, I looked at it as a chapter in the game of the sport that I love dearly. And that night, I closed another chapter, and in this chapter, it was I who had the upper hand.

Brennen is a hunter who has dedicated his life to whitetail deer and whitetail deer hunting. Brennen is the Co-Owner of Black Stamp Media and the Executive Producer and one of the stars of the hunting show "The Breaking Point." Hailing from Sparta, Wisconsin, Brennen is now a resident of Iowa.