To become successful at anything, knowledge is the key. To become the best turkey hunter you can be, you must study the bird, the behaviors, and the hunting techniques that have been proven successful year after year.

The History of the Wild Turkey

Wild Turkey are the largest ground nesting birds in North America and commonly found throughout the Lower 48 states and even Hawaii. European settlers originally found the wild turkey to be in abundant numbers but over time declined to the point of a questionable existence.

In the 1960’s efforts were made to restore the wild turkey from their impending doom. The comeback of the wild turkey is one of the greatest accomplishments of wildlife management efforts. Over the course of years 5 distinct subspecies have evolved across North America. All of which favor different habitats ranging from desert to hardwoods mixed with early successional areas. 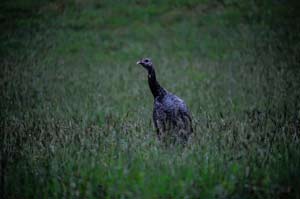 A soaked hen. You can see the small body and opaque head colors. – Photo courtesy of Cody Hesseltine of Prodigy Outdoors.

Females are referred to as “hens” and typically weigh anywhere from 8-12 pounds which is distinctly smaller than the males commonly referred to as “Toms” or “gobblers”. The hens are distinct in that they do not possess spurs or a beard but hens with beards are an anomaly.  Their heads are typically feathered and an opaque mix of grays and blues.

Males, or “Toms” are larger than hens, typically 18-25 pounds. They are known for their gobbling and distinguished by their bright red-white-blue head, beard and the displaying of their feathers which is referred to as strutting. Toms strut to attract a hen and when the hen is ready she will lay on the ground in front of him. Toms possess beards and spurs which are sought after by hunters and depict the birds age.

The Types of Turkey in the United States

The Eastern wild turkey’s distribution covers 38 states primarily east of the Mississippi river and numerous Canadian provinces and very abundant. They are distinguished by their brown tail- feather tips and white-barred wings. 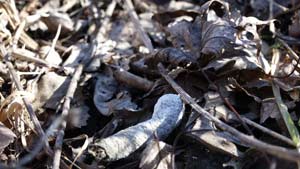 Large turkey droppings are a likely sign of a gobbler. Photo courtesy of Prodigy Outdoors.

The Florida or Osceola turkey are found only in the Florida panhandle. They are considered the weariest of the subspecies and very difficult to hunt. They are smaller than the eastern and very shy due to living in thick habitat. They are distinguished by their iridescent green-purple body feathers and less pronounced white-barring on wing feathers.

The Merriams wild turkey are found along the Rocky mountain region and are known for their white- tipped feathers.

The Rio Grande wild turkey’s range is found is desert regions of Texas, Oklahoma and Kansas. The Rio Grande is typically found in abundant numbers.

The Gould’s wild turkey can only be found in Mexico, New Mexico and Arizona. Their populations are fewer than any of the other subspecies.

Turkey possess two senses that make them such a challenge and a desirable species for hunters. They can hear and see extremely well which means hunting them requires full camouflage and a slow-stealthy approach. 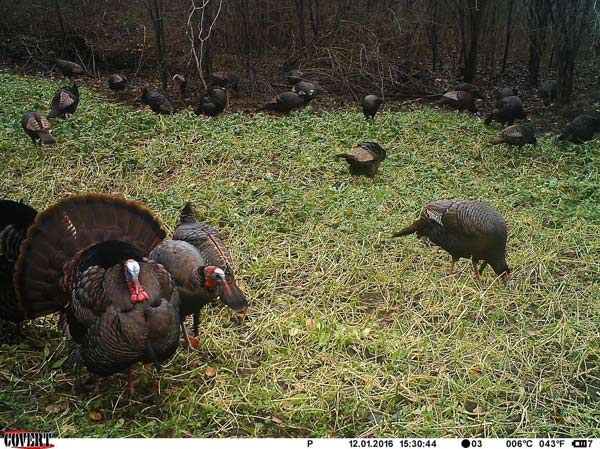 Turkey feeding in the food plot and thinking its spring during the warm winter weather. Photo courtesy of Prodigy Outdoors.

Turkey are primarily hunted in the spring season. Gobblers are targeted but bearded hens are legal in some states to harvest though it isn’t biologically favored. Dates vary from state to state and range from March to May.Typically hunting is done at dawn until midday but some states allow you to hunt spring turkey all day. Check your local and state regulations. 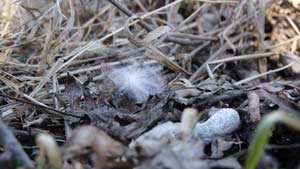 Feathers and scat below a roost tree in Iowa. Photo courtesy of Prodigy Outdoors.

Turkey can be located by hunters visually in fields, sign amongst the forest, listening or using locator calls and some even use trail cameras.  Turkey often frequent field and field edges to feed and for gobblers to display themselves. Field edges and thick hedgerows are also often where hens will lay their nests.

Amongst the forest hunters can look for turkey sign in the form of scat, feathers and scratching of the leaves. These are all good signs of turkey in the area and birds will likely return to these areas. 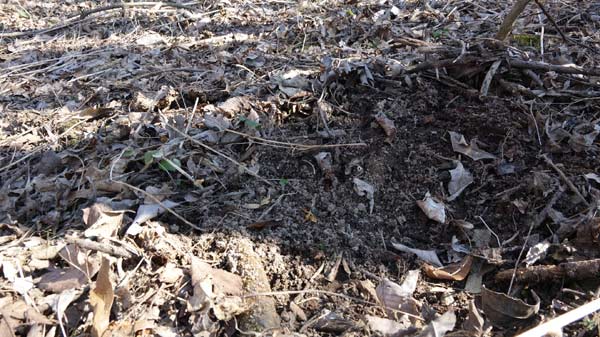 Scratches across a hardwoods hillside or ridge are tall tale signs of a place to hunt. Photo courtesy of Prodigy Outdoors. 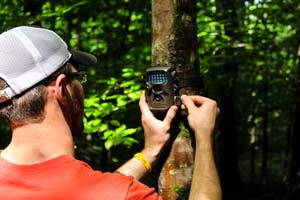 The Author hanging a trail camera to get photos of turkey and other wildlife during the spring months.Photo courtesy of Prodigy Outdoors.

Hunters often try to locate gobblers in the early morning or the evening just before dark while the birds are in their roost trees. You can locate gobblers using calls such as an owl hoot or crow call which cause the gobbler to shock gobble, giving up his location. For more information, visit our how to call turkeys page.

Trail cameras can be used as a way to collect time stamped photos while reducing unnecessary disturbances or during periods where you have a hard time getting down to your hunting property.

How to Hunt Turkey 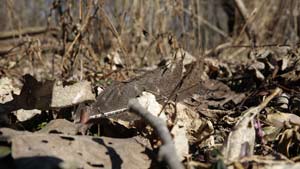 Turkey feathers found are a great sign of where to hunt.

There are various methods that all will lead to you having fresh wild turkey breast frying in hot oil. I typically try to call less than I would like to because it is easy to over call and cause a tom to hang up out of range.

Naturally the hens go to the toms to breed instead of visa versa so when you do call a tom into range it should be considered a success because you have coaxed him against his natural breeding habits. For more information on turkey hunting visit our turkey hunting strategy page.