My first deer kill was during my second season of hunting. I was 16. I was hunting a clearing in a woods from my chain on tree stand… yeah I said chain on. It was getting dark and a doe came in very late. I raised my bow but was having a hard time seeing my pins so I instinctively took a 30 yard shot. I thought I hit her but couldn’t tell. I looked for my arrow and couldn’t find it. I left. 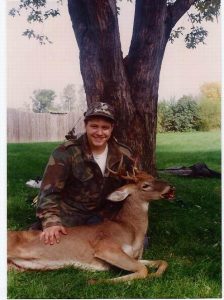 I needed help so I went to the local bowling alley to talk to one of the best trackers I know, Donald Rigoni. Donald asked me how she took off and I told him “Like a bat out of hell”. After hearing that, he left the bowling alley and headed to the woods with me. I brought him to the spot and said “she was here and ran off that way.”Donald squatted down, looked with his flashlight, and said, “nope”, she ran this way. I didn’t believe him but followed him as he tracked her. About ten yards later, he said “we got blood“. I started getting excited. We went another 15 yards and there she was. I couldn’t believe it!

The aluminum Easton Game Getter 2315 arrow was still in her; right in her heart. What a lucky shot. He helped me field dress her and we were on our way. What a memory of my first deer kill and what a good friend.