Study the image to the right to help learn the parts of the compound bow. Click on a compound bow part for glossary definition.

Parts of a Compound Bow 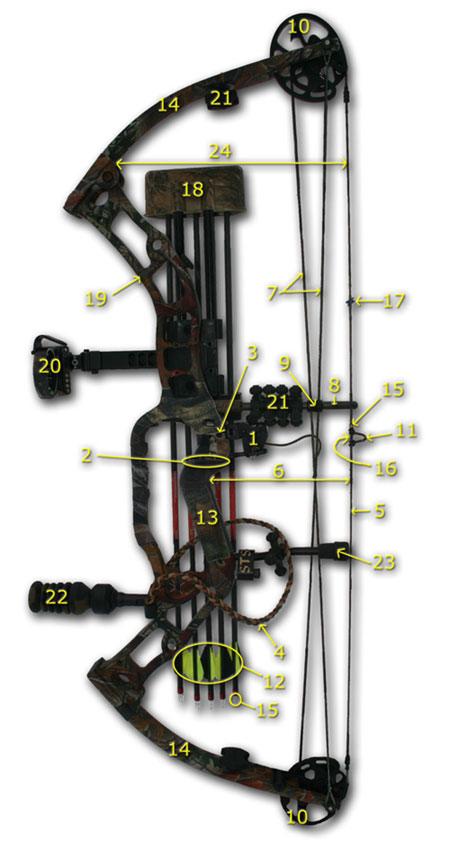 Having proper archery shooting form will allow you to deliver consistent, accurate results. Elements of proper form include, but are not limited to, proper stance, posture, grip, arm positioning, and proper shot execution with a compound bow.

Made from aluminum, carbon or a combination of carbon and aluminum, the modern hunting arrow has came a long way from its wooden predecessor. Carbon is the popular choice among modern archers because of its straightness, durability, and weight to spine ratio.

The arrow rest is the unit that screwed into the riser via the berger hole on a compound bow and provides a catch for the arrow to rest on before and during the shot. Models are either stationary while some mechanically “drop away” during the shot.

The arrow shelf on a compound bow is the horizontal shelf designed into the riser which contains the arrow in all stages of the shot. It also protects the gripping hand from accidental injury.

The axle to axle measurement on a compound bow is from the center of the Cam’s pin (axle) to center of cam pin (axle). This is a manufacturer’s provided spec measurement and for a bow to operate with maximum efficiency, the measurement should be at least within 3/16 of an inch.

Back tension is the technique used to make the most efficient shot in archery. It involves, along with other essential form elements, the tightening of the back muscles while releasing the shot.

The Berger Hole is the tapped hole above the arrow shelf on a compound bow. The arrow rest is screwed into the berger hole from the outside of the riser. It is standard to have your arrow centered on the center of the berger hole when setting up the bow.

A bow press is a mechanical press which flexes the compound bow by pressing the  limbs to take tension off the bow string and cable(s) so maintenance work can be performed on a compound bow. There are many varieties of presses on the market all of which should be only used by people with knowledge of that particular press.

The Bow string is the string, on a compound bow, which terminates at the cams on a two cam system. On a “solo cam” system, the bow string’s ends both terminate at the bottom cam but travels around the top idler wheel.

Brace height on a compound bow is the measurement from the crotch of the grip to the bow string. The average brace height is around 7 inches.

Broadheads are the cutting head attached to the end of the arrow. The first broadheads (arrow heads) were chiseled out of stone and have improved drastically throughout the centuries. Current broadheads are made of razor sharp surgical stainless steel and are either of a fixed blade design or a mechanical design. They are usually sold in 75, 85, 100 and 125 grain weights.

The cables on a compound bow run from cam to cam and work with the cams during the execution of the shot.

The cable guard on a compound bow is the fiberglass rod which runs perpendicular from the riser towards the bowstring and works with cable slide to keep the cable(s) out of the arrow’s line of fire.

The cable roller is a replacement of the cable guard / cable slide system and is found on many newer bows. It is stationary and contains the string / cables out of the line of fire via rollers.

The Cable slide on a compound bow is a plastic piece which attaches to the cable guard and holds the string / cables out of the arrow’s line of fire.

Cam lean on a compound bow refers to the amount the cam(s) are canted or tilted off the vertical alignment of the bow and is due to the cable(s) and or bow string being pulled to the cable guard. The longer the ATA measurement, the smaller the cam lean; the shorter the ATA the greater the cam lean.

A compound bow is a modern bow that uses a levering system, usually of cables and cams, to bend the limbs before a shot is taken.

The cable, which is not only a key in the timing of the compound bow’s cams, but is also the cable predominantly used in setting a bow’s draw weight.

A D-Loop surrounds the arrow at the string and is a point of connection for a mechanical archery release; it is made or a short piece of cord fastened to the bow string by two knots.

A compound bow’s draw weight is the amount of force, measured in pounds, needed to bring the bow to full draw.

Field dressing is the procedure in which a hunter removes vital and digestive internal organs and parts of an animal.

Field points, often referred to as “practice tips”, are metal points, roughly the same diameter as the arrow, which are screwed in to the arrow’s insert. They are usually sold in 75, 85, 100 and 125 grain weights.

Fletchings are the feathers or plastic vanes which are glue to an end of an arrow that steer and correct an arrow during flight. They can be oversized to dramatically reduce speed ( for bird shooting ) or undersized for increased speed.

Front of Center. Measured as a percentage of how far the balancing point of an arrow is forward of the measured center.

Unit of measurement used when weighing an arrow and its components.

The grip on a compound bow is the part of the riser that you hold when shooting. Most manufacturers install a removable grip which can be replaced with an aftermarket grip to suit an individual’s comfort.

IBO speed of a compound bow is defined as the initial velocity, in feet per second, of a 350 grain arrow shot from a bow at a draw weight of 70 lbs with a draw length of 30 inches.

An idler wheel on a compound bow replaces the top cam on a solocam compound bow. It is round and only has contact with the bowstring and not the cables.

An insert is the hollow cylindricular unit containing threads which accepts a broadhead or field point. These are “inserted” into the arrow after the arrow is cut to the desired length.

The let off of a compound bow is the percentage of the bow’s draw weight that an archer is not holding at full draw. Example: 70 pound draw weight X 80% let off = 56 lbs of let off or 14 lb full draw holding weight.

Compound bow limbs are the flexible fiberglass planks that are attached at the riser on one end and support the cam or idler wheel on the other. They work with the shooter to store and release the kinetic energy need to deliver a shot. With most bows, the limbs are given a poundage rating: 50-60lbs, 60-70lbs, 70-80lbs, etc. If an archer wanted to raise or lower their draw weight outisde of the 10 pound range that their limbs provide, they can do so by replacing the limbs with the preferred weight rating.

A longbow is a type of bow that is tall (roughly equal to the height of the person who uses it); this will allow its user a fairly long draw, at least to the jaw. A longbow is not significantly recurved. Its limbs are relatively narrow so that they are circular or D-shaped in cross section.

The Mechanical release or “release” is the device held by or attached to the archers shooting hand which aids the archer in drawing back and releasing the bowstring. Most contain and operate off a trigger while some operate off the pure back tension rotation of the shooting hand.

The nock is the insert on the rear end of the arrow which attaches to the bow string. A nock may also refer to the crimpable collar which some archers attach to their bowstring at the “nocking point.”

The nocking point is the location, on the bow string, that the arrow attaches to before a shot.

Paper tuning is the method used when an archer shoots an arrow ( field point installed ) through a piece of paper in order to study the rip created. The rip is a “snapshot” of the arrow’s flight at that distance ( around 8 feet ) and, depending on results, lets the archer know what he has to do to perfect his arrow flight.

The peep sight is the donut shaped device inserted between the strands of the bowstring which gives the archer’s eye its first point of alignment. When the archer lines up his sight while he is viewing through the peep sight consistency is more obtainable.

The quiver is the permanently mounted or detachable unit which contains the archer’s arrows. Some have one or two points of holding contact on the arrow and a head either filled with a foam product or hollow. For mechanical broadheads we suggest using a quiver with two points of contact on the arrow and with a broadhead containment compartment which is hollow; this keeps the mechanical broadheads from unnecessarily deploying the blades and limits wear and tear on crucial broadhead components.

A range finder is a device which, either with a laser or mechanical lenses, estimates a targets distance.

A recurve bow has tips that curve away from the archer when the bow is unstrung and, when strung, stores more power than an equivalent straight limbed bow.

The riser is the central component of the bow which is normally constructed out of machined aluminum.

An archery sight attaches to the riser and contains pins, cross hairs or a laser dot which the archer can adjust to make a more accurate shot.

Silencing aids are various accesories which can be purchased and installed on a bow/bowstring to absorb vibration to quiet a shot. These attach to either the bowstring, cables, limbs, or the riser.

The stabilizer is an optional accessory which is installed in the tapped hole below the grip and on the front of the bow. Stabilizers stabilize the bow at full draw giving the bow a different center of balance. When desired aim is achieved and the shot is taken, stabilizers maintain that line of aim resisting minor twitches/torquing during the execution of the shot. They deliver the same type of stabilization that a tightrope walker’s balancing bar. Stabilizers can be front mounted or side mounted and greatly increase accuracy when set up properly.

This silencer, which is attached at the riser and or the ends of the limbs, has contact or near contact with the string prior to the shot and aborbs vibration during the shot which is directly transferred from the string.

The yoke is the upper part of a control cable, forming the shape of a “Y”, that attaches to the outsides of the upper limb of a compound bow at the axle pin.

Yoke tuning is the adjustment of each side of the yoke in order to achieve a linear trajectory of the bow string off the idler wheel at full draw.

For more information on the compound bow, click here.